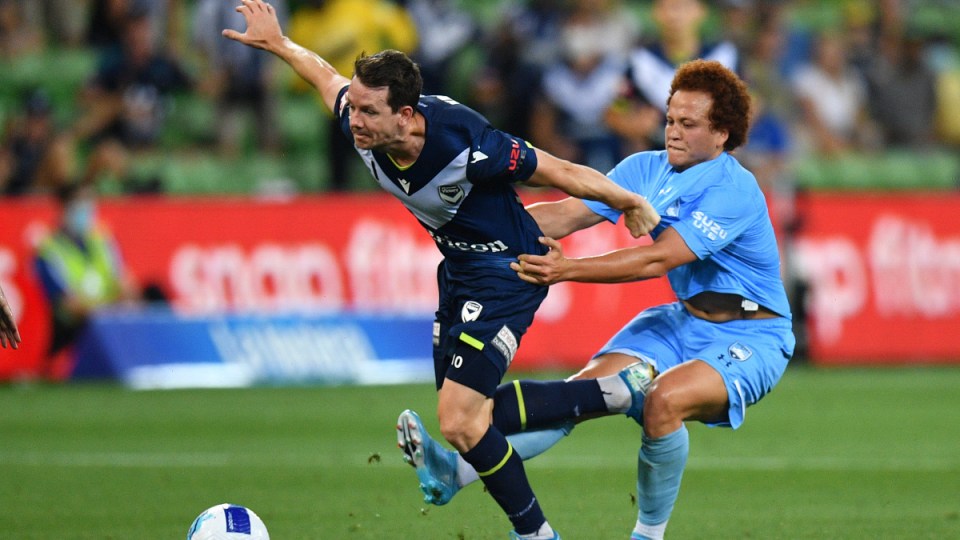 Coach Tony Popovic has teed off at A-League Men officials over a missed foul he believed “cost” Melbourne Victory three points in its dramatic 2-2 draw with Sydney FC on Tuesday night.

Sky Blues striker Bobo headed home an 81st-minute equaliser to earn a point at AAMI Park but Popovic was incensed a corner was even awarded.

Popovic believed Alireza Faghani should have awarded Leigh Broxham a free kick due to a high boot from Sydney’s Elvis Kamsoba before the ball went out.

“The way it finished in the end leaves a sour taste. We hit the lead and it never should have been a corner in that situation,” Popovic, who received a yellow card after remonstrating with Faghani after the goal, said.

“The simplest decision of the night, the referee and the linesman between the two of them couldn’t make a very, very basic, simple decision.

“I wanted the ref (Faghani) to come over, actually. I actually wanted him to come to me. It’s a clear, clear foul.

“We had a player here (Rai Marchan against Perth) sent off for a very similar challenge. So if you don’t deem it as a yellow or red card, it’s a foul. It’s a clear foul.

“That linesman on our side was constantly lifting his flag for a foul he thought the referee didn’t see and he thought ‘OK, I’ll help you out, this is a foul.’

“On that occasion, between the two of them they can’t see that it’s a clear foul.The simplest decision of the night, and it cost us.”

Meanwhile Popovic said Marchan could be “out for a while” after he was carried off in the 64th minute, then later taken to hospital, after a nasty aerial head clash with teammate Jason Geria.

Popovic said concerns over Marchan weren’t just concussion but the “heavy” and “serious contact” in the collision, conceding the midfielder could have suffered facial fractures.

Earlier, Ben Folami put the league leader in front in the 17th minute only for Milos Ninkovic to reply in the 37th.

Robbie Kruse tapped home the would-be winner in the 77th before Bobo grabbed Sydney a point, extending its unbeaten run against Victory to nine games.

“I was pleased with the character they showed to come back twice,” Sydney coach Steve Corica said.

“It has been tough because we’ve played five games in 13 days and that’s not easy in these conditions, this climate and with COVID. I’m very proud of the performance tonight.

“I was disappointed still because we probably could have won it.”