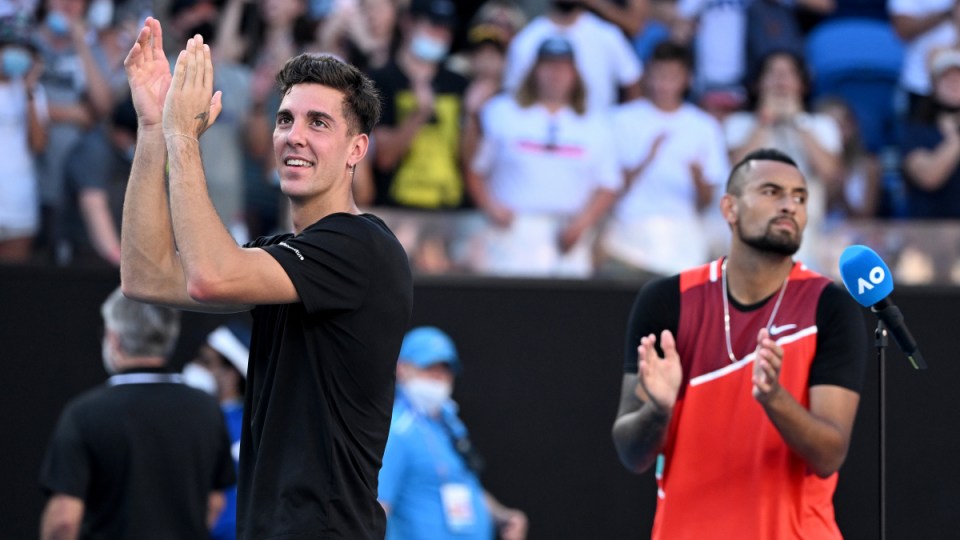 Thanasi Kokkinakis and Nick Kyrgios are through to the men's doubles semi-finals at Melbourne Park. Photo: AAP

The chaotic Nick Kyrgios-Thanasi Kokkinakis double act keeps rolling on with the ‘Special Ks’ storming into the Australian Open semi-finals.

The doubles match was full of the usual drama and frivolity fans have come to expect when Kyrgios is on court.

After appearing to be cruising through to the last-four, the Kyrgios-Kokkinakis combination was broken early in the second set.

The pair were up 0-40 and had the pro-Australian crowd in delirium with an opportunity to break back at 3-5, but they dropped the next five points to concede the set.

Kyrgios went from sprinting around the court revving up the crowd to slamming his racquet and arguing with the umpire just minutes later.

But the unseeded pair regained their composure to ride the wave of support to claim the third and deciding set.

Kyrgios and Kokkinakis will meet third seeds Marcel Granollers and Horacio Zeballos in the semi-finals as they look to seal an unlikely spot in the doubles decider.

Host broadcaster Nine Network seemed to confirm Kyrgios’s claim on Sunday that the “TV ratings (are) up like 45 per cent” for this year’s Open because of his extraordinary run through the doubles draw with Kokkinakis.

Just like Kyrgios and Kokkinakis’s previous three matches during the tournament, viewers were taken on a rollercoaster of emotions.

In the first set, Kyrgios smashed a dead ball into the court that flew unintentionally into the stands and hit a child in the face.

Kyrgios noticed the young boy looking upset and offered him a racquet from his bag to say sorry.

The Kyrgios-Kokkinakis combination could be a potential winner for Australia’s Davis Cup qualifier against Hungary in Sydney in March.