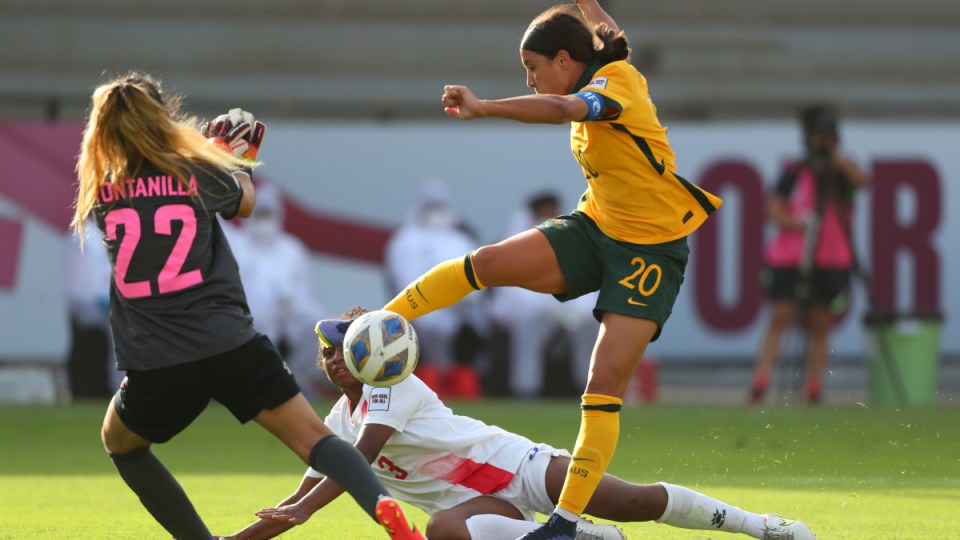 Australia has maintained its perfect start to the Women’s Asian Cup with a 4-0 win over Alen Stajcic’s Philippines, securing safe passage to the quarter-finals in the process.

After being held goalless in the opening half, Sam Kerr’s sixth goal of the tournament and 55th in Australian colours finally broke the deadlock against a well-drilled Philippines coached by ex-Matildas boss Stajcic.

An own goal and Emily van Egmond’s fourth goal of the tournament then gave Tony Gustavsson’s team breathing space as the Philippines’ resistance crumbled.

A fine left-foot finish from young gun Mary Fowler from the edge of the box in the 88th minute wrapped up the victory.

Despite the scoreline, Monday’s game was a stark contrast to Friday’s opening fixture against Indonesia where Australia held a nine-goal half-time advantage on the way to an 18-0 thrashing of the world No.94.

Australia was given an early indication that Monday’s game would be a tougher proposition when a one-two allowed Filipino striker Chandler McDaniel to nip in behind Alanna Kennedy, but her shot went wide of the target.

Kennedy had Australia’s first real sight of goal just moments after McDaniel’s early chance but she was muscled off the ball as she pounced on a Steph Catley corner and Philippines goalkeeper Kiara Fontanilla claimed possession.

.@cortneev9 comes on to make her Australian debut and makes an immediate impact!!

Australia’s frustration as chance after chance went begging were made evident when Kerr, scorer of five goals in the Indonesia rout, screamed in anguish after steering a free header from another Catley delivery wide of the goal after the half-hour mark.

Perhaps the Matildas’ best chance of the half fell to Clare Polkinghorne when another set piece was headed back across the penalty area by Kerr in the 37th minute.

The ball fell to an unmarked Polkinghorne with the goal at her mercy, but the 32-year-old’s scuffed shot dribbled agonisingly the wrong side of the post with Fontanilla beaten.

All the frustration of that goalless first-half evaporated however just six minutes into the second term when Kerr headed home another dangerous Catley corner to give the Matildas the breakthrough they’d been searching for.

One became two in a flash when Dominique Jaylin Randle headed into her own net under pressure from Kerr in a mix-up with debutante Fontanilla.

Van Egmond, scorer of a hat-trick in the Indonesian demolition, got in on the action by finishing another set piece move 14 minutes later.

With the game secure, Gustavsson turned to his bench, handing teenager Holly McNamara a second appearance while Sydney FC attacker Cortnee Vine also came on to make her Matildas debut.

Fellow up-and-comers Kyra Cooney-Cross and Remy Siemsen also came on before Fowler iced the win with her seventh international goal.

Australia will look to seal top spot in the group when it faces Thailand on Friday while Stajcic and the Philippines will hope to book their quarter-final berth with a positive result against Indonesia on the same day.