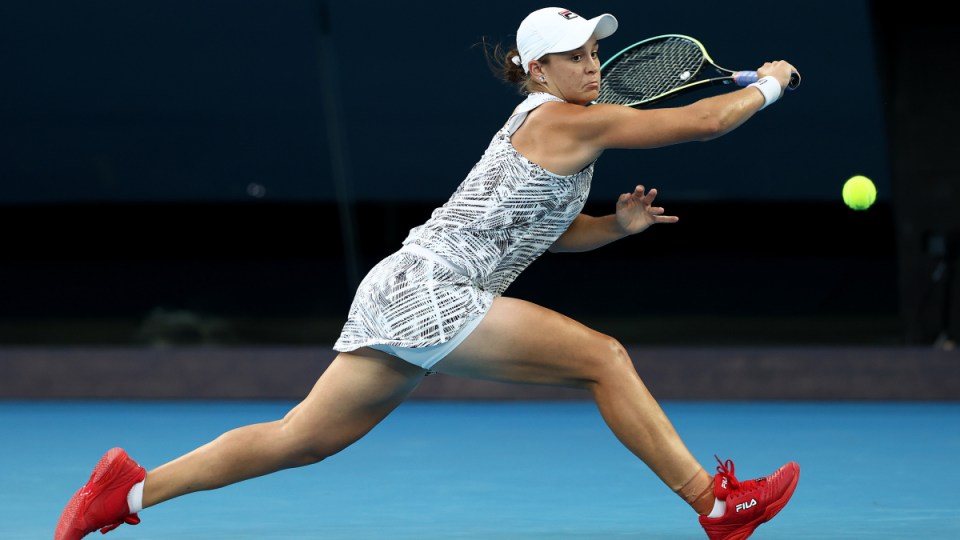 As expected, Queensland’s Ash Barty is in the box seat for a first appearance in the Australian Open singles final.

There had been doubters who felt the unseeded 20-year-old Amanda Anisimova might unseat Barty in Sunday night’s last-16 clash on Rod Laver Arena, but a 6-4 6-3 win proved otherwise.

It was in the end rather straightforward, Barty holding her nerve and her court positioning perfectly, leaving the American to hit long time and again.

The enforced errors, 34 against 17, proved pivotal.

We learned little about Barty, but that is not to decry her performance.

Far from it, it was job done, no stress, onwards and upwards.

“It’s a lot more fun than last year,” said Barty when the AO crowds were shut out after a five-day state lockdown. “I enjoyed testing myself against her.”

“We’ll wait and see,” said Barty when asked if beating Anisimova, whom she defeated on her way to the 2019 French Open title, was an omen.

She is unlikely to be thinking ahead too much.

Yes, she is four matches down with not a foot wrong, but there are still three to go.

Next up: Jessica Pegula

She faces the American Jessica Pegula on Tuesday. A reminder, Pegula has form at the AO losing in the last eight last year.

Pegula stands apart from possibly any player ever to have played professional tennis.

Her parents own the NFL football team, the Buffalo Bills.

Her dad Terry outbid Donald Trump and Jon Bon Jovi in 2014 to buy the franchise.

He – and Jessica eventually we assume– is worth billions.

Will she beat Barty though?

It’s unlikely but Pegula’s self belief and determination, despite a seeding down at 21, are at the very upper end.

Remember though that Barty has lost here when she really shouldn’t have, last year to Karolina Muchova in the last eight and to Sofia Kenin in 2020, neither player a big name at the time.

She seems settled this year and has adopted a smooth, corporate demeanour, positive always and never passing comment to raise even an eyebrow.

Behind doors, her analysis will be far more extensive and she comes to court fully prepared always. She should reach the final, at least.

The Czech Barbora Krejcikova is the favourite to play Barty or Pegula in the semi-finals, seeing off former double champion Victoria Azarenka with ease on in Sunday’s last 16 clash.

She came at 26 years old from nowhere to take the 2021 French Open and is a legitimate AO contender.

Simona Halep or Iga Swiatek dominate the other half of the draw.

As with Ash, Halep has won Wimbledon and the French Open and while she has slipped lately (seeded 14) she is in form and is immensely popular. She genuinely likes Australia and was long coached by Darren Cahill before splitting last year.

She knows the pressure that comes with winning, with more than 30,000 people turning out to welcome her home to Romania after her 2020 Wimbledon win.

Swiatek is young, (20), pacy and the French Open 2020 winner and has won on the Australia blue (In Adelaide 11 months ago). Do not overlook her.

To the men and, playing devil’s advocate, thank goodness Novak Djokovic is gone.

We should never become bored with sporting greatness, but this year’s baggage was beyond excessive.

Daniil Medvedev has been imperious this AO anyway. The reigning US Open champion and last year’s runner-up is the man to beat.

There is a no messing outlook to the Russian who has been unimpressed with poor crowd behaviour this week and not afraid to say so. (A note to the ‘Siuuuu’ enthusiasts – shut it.)

There is one former Australian (Championships) winner firmly in the Medvedev corner.

Frank Sedgman, who won the 1949 version of the AO, is very much in touch with current-day tennis and was in the crowd on Sunday at Melbourne Park, the second time already this fortnight.

Frank Sedgman is one of the last surviving tennis greats from the golden age of the 1950s.

For years, he was the world number one – and this year is the 70th anniversary of his first US Open victory. #abc730 pic.twitter.com/F9SMLq7Kfv

Sedgman, who was also the Wimbledon and US singles champion in 1952 – 70 years ago, is the grand old man of Australian sport. Listen when he speaks.

The Russian is top dog even discounting a certain Serb, Sedgman says.

“I think Medvedev can beat Novak anyway. He has all the shots and his temperament is good and he has had a good (last) year,” Sedgman said.

He has played with or watched almost everyone of note ever. Yes, Djokovic is handy he says, but there have been other golden ages in tennis.

“Novak has proved himself pretty well. Some of the Australians were as good as he is – Rod Laver, Lew Hoad, Ken Rosewall.”

It will be against the young Canadian Felix Auger Aliassime or the 33-year-old Croat Marin Cilic, who has two ATP semi-finals in Adelaide under his belt this year already and put out No.5 seed Andrey Rublev on Saturday.

Former US Open champion Cilic is an outside shot for the title, but the heavy money should go with Medvedev to reach the final.

Though don’t bet against Aussie No.1 Alex de Minaur against Italy’s Jannik Sinner (seeded 11) on Monday.

De Minaur has been allocated a curious afternoon slot but can reach the quarter-finals. A semi-final also is within his reach.

“One of the worst matches I have played,” said the German. “Today was just awful.”

Weirdly, Nadal is under the radar. Like Novak, he has 20 majors to his name, but the spotlight is elsewhere. It shouldn’t be, the man is a colossus.

A couple of years ago in a press conference here, Roger Federer was asked about Nadal. Unlike, Djokovic, they’re pals.

“I have his phone number,” said Federer when asked if they were in regular contact.

“But I don’t like to use it too often,” the great Swiss champ said. “He is Rafa.”

Cherish these two, and Novak, while they’re still around.

Just after 6pm on Sunday, Kia Arena was throbbing as Nick Kyrgios and Thanasi Kokkinakis moved into the third round of the men’s doubles.

“To get this atmosphere for a doubles match is insane,” Kyrgios said.

The bromance lives on.

This is no scratch pairing. They played together nine years ago in the AO junior doubles.

Can they win it this time out?

Ice-cool Ash Barty takes care of business, positioning herself for shot at glory