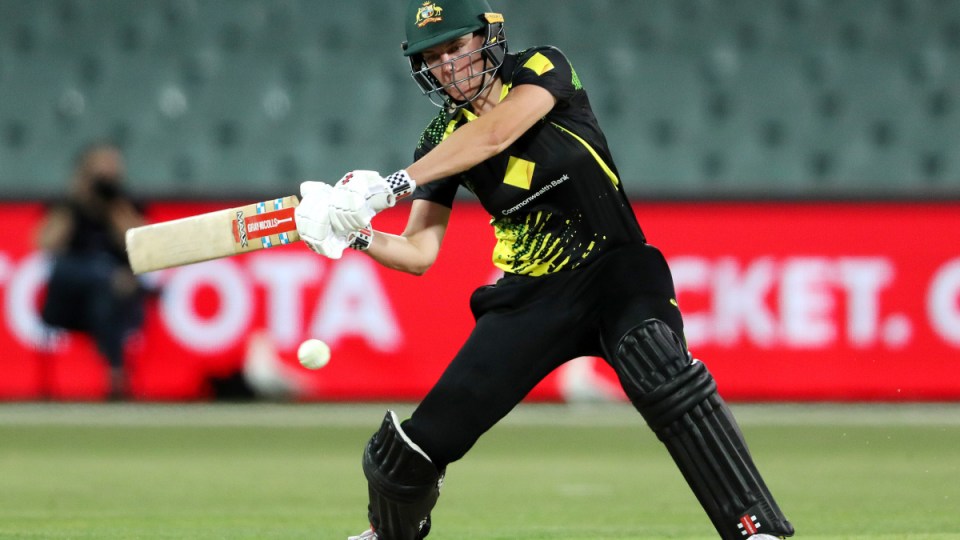 Tahlia McGrath produced one of the finest games in Australia’s T20 history to celebrate her coronation as the team’s chief all-rounder and start the Ashes with a nine-wicket win over England.

Just hours after Australia made the biggest selection decision in memory by dropping Ellyse Perry, McGrath made a statement with 3-26 and an unbeaten 91 off 49 balls at the Adelaide Oval on Thursday night.

McGrath’s spell with the ball dramatically changed the match, restricting England to 4-169 when it looked likely to post something closer to 190.

The South Australian then helped pull off the biggest T20 chase in the country’s history, coming in at No.3 and taking control of the game.

What an absolute weapon.

Tahlia McGrath, take a bow! One of the great #Ashes performances! pic.twitter.com/afqob2W0u1

It marked the first time in history a female player has scored 75 or more and taken three wickets in a T20 international.

It was McGrath’s player-of-the-series performance against India last year that sparked the squeeze that pushed Perry out of Australia’s T20 team, holding her spot when Rachael Haynes returned from injury.

And on Thursday night she showed why.

McGrath hit 13 boundaries and a big six in her knock, bringing up a 28-ball half-century as Australia chased down the target with three overs to spare.

She showed class late-cutting behind the wicket, hit hard through the offside when given width and smashed her one six over the legside from Freya Davies.

If one shot sums up Tahlia McGrath's brutal innings – it's this one!

Well done to our man in the stands, finding the ball 😂 #Ashes | @CommBank pic.twitter.com/1Xvjmk6iPa

Meg Lanning hit 64no in the chase, after moving herself to the top of the order with Beth Mooney out injured.

Alana King also took a wicket on debut, deceiving Tammy Beaumont to have her caught and bowled after England had got away to 0-81 off 10 overs.

But the star of the night was McGrath.

South Australian Tahlia McGrath turning it on for her home crowd at Adelaide Oval! #Ashes pic.twitter.com/fhsVx9JDWm

She also got Amy Jones in her next over, while playing in just her fourth T20 international.

Meanwhile, Perry’s omission came after a week of conjecture about her spot, but is still a significant shock given her standing as one of game’s greatest players.

She has battled to regain her best with the ball since the COVID-19 pandemic disrupted her comeback from a hamstring injury two years ago.

Coach Matthew Mott also noted that Australia was after middle-order players who could produce a strike rate of 150 when quizzed on Perry’s position earlier this week.

Perry is still regarded as one of the world’s best in the 50-over and Test formats, and will almost certainly retain her spot when selections are made for those matches.

T20s and ODI are worth two points in the multi-format series, while four are available in the one-off Test.