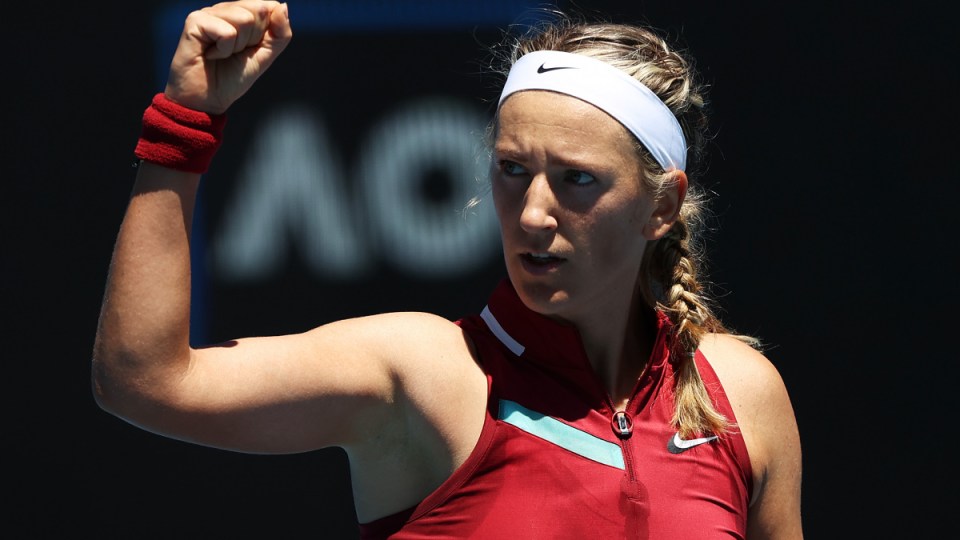 It’s easy to forget that Victoria Azarenka is a double Australian Open champion.

Of the female singles players turning out in Melbourne this year, only Naomi Osaka and Angelique Kerber, on four and three respectively, have won more majors.

It is some feat but yet is diminished somewhat by distance.

It is 10 years since Azarenka won her first trophy here, a title she successfully defended 12 months later.

But the Belarusian should not be overlooked this Open, on court or off.

Early on Wednesday there was a routine win over Switzerland’s Jil Teichmann to propel her into the third round, all very easy and little of note. She looked good.

Yet it was in her media conference shortly after where the 32-year-old shone.

Fronting up in a winter-warmth hoodie and reflective sunglasses more akin to a motorcyclist in the 1970s Californian police force, she didn’t flinch at any line of questioning.

Recently returned to the Women’s Tennis Association WTA player council, she talked passionately and with authority on the ever-vexing issue of vaccination.

She is, she said at the outset, a firm believer in science.

This clearly was not about to be any Novak Djokovic love-in.

“I believe in getting vaccinated. That’s what I did for myself,” she said

“I don’t necessarily say that (by) getting vaccinated, then nobody will be sick. But I think it is a step to hopefully battle against this coronavirus, hopefully to bring it down globally.”

Mandating that all countries require all players to be vaccinated is not straightforward but is a step forward, she said.

“I think it would just be helpful for everybody in the world, especially when we are travelling internationally.”

Thinking of others when it comes to vaccinations is imperative, she believes.

“Personally, it’s not necessarily maybe about myself, it’s about other people. Like my parents, for example, are at high risk for COVID.  I had COVID in November. Unfortunately my parents also got.  It was tough for my dad. Thankfully he was vaccinated because I honestly don’t know what could have happened otherwise.

“For me there is a social responsibility for other people who are much more vulnerable maybe than us. I definitely look at it from that point.”

‘Could have been prevented from the beginning’

Regardless, a wider damage to tennis has been done she said. Clarity is the only way ahead.

“What happened after, I don’t believe there was anybody who looked good in any case. That became a bit of a circus. I think there should be a really hard look on this situation moving forward.

“As soon as there is a grey area in the rules, that gives a bit too much questions and situations like this happen. On certain things I think a black-and-white approach is necessary. In my opinion, this should be the case.”

Should she make it thought another round, Azarenka will meet the current French Open champ Barbora Krejcikova, seeded four and an under-the-radar tip for the title next week.

Former champion Rafael Nadal struggled a touch more than the scoreline might suggest in his 6-2 6-3 6-4 win over qualifier Yannick Hanfmann on Rod Laver Arena.

Intriguingly, the heavy-hitting Nadal served just one ace all match, although the result was never in doubt.

“His level today was much higher his ranking (126),” said Nadal who later put his fitness down to playing golf more than hanging around in the gym. Muscular physiques are in the family genes, he said.

There is, it seems, little end to the Nick Kyrgios appeal.

Teaming up with pal Thanasi Kokkinakis again (“I love him,” Nick told the John Cain Arena fans on Tuesday), the duo faced off against fellow Aussie Alex Bolt and James McCabe on court 3 late afternoon.

Midway through the first set there were 20 people or so queuing outside each of the court’s 24 entry points, drawn by the cacophony of noise within.

It was a FOMO occasion but there will be another day for fans unlucky to miss out as Nick and Thanasi won in two sets and will play again.

Before that comes Thursday’s main event, the showdown, the biggest draw of the AO 2022 so far, Nick and No.2 seed Daniil Medvedev on RLA at 7pm.

It is a blockbuster in name but bear in mind Kyrgios’ near-wholesale lack of preparation (COVID-19, a last tournament win last July) and only one result looms.

Kyrgios has beaten the Russian both times they have met to date, but all circumstance points to a Medvedev win this time.

Whoever departs, it will be the tournament’s loss but such is the essence, and appeal of, a tennis major.

Buy a ticket or tune in.

The loss was no reflection on Millman whatsoever, the German was imperious all night.

Should Medvedev falter any time this fortnight, Zverev will be next in line to be crowned men’s champion a week on Sunday.

Off court and on, straight-talking Victoria Azarenka still winning admirers