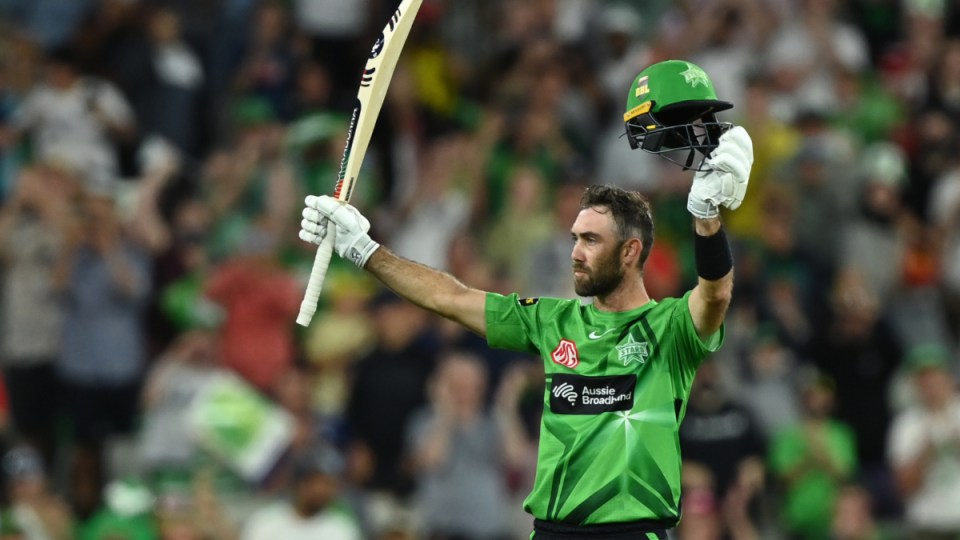 Glenn Maxwell has posted an unbeaten 154 against Hobart, the highest score in BBL history. Photo: AAP

Glenn Maxwell’s all-out assault on Hobart has netted him and Melbourne Stars the highest scores in BBL history, handing the Hurricanes a reality check with a 106-run hammering on the eve of the finals.

Maxwell thumped an unbeaten 154 from 64 balls at the MCG, smashing 22 boundaries and four sixes in the most brutal display of hitting in the competition’s history.

It helped the Stars to a record total of 2-273, 41 more than the next best in BBL history and the third highest in any franchise or international T20 game in history.

Only totals made by Afghanistan and the Czech Republic have been higher, with those matches against fellow minnows Ireland and Turkey.

The second-fastest fifty by a Star! #BBL11 pic.twitter.com/L9Z2gSCbTW

Maxwell’s score was also the ninth highest in T20 history, after the Hurricanes opted to rest Scott Boland and Riley Meredith.

The superstar dominated the Hurricanes all round the wicket, with the shot of the night an outrageous switch-hit flick over fly-slip for six.

His century was the second-fastest in BBL history, coming in 41 balls and just two shy of Craig Simmons’s 39-ball effort in 2014.

The right-hander helped take 21 off one D’Arcy Short over, while he hit five boundaries for 22 runs off another from Sandeep Lamichhane.

Now Stoinis is getting amongst it!! 💥 #BBL11 pic.twitter.com/PowM0fPwR4

Maxwell was not alone with Marcus Stoinis also finishing unbeaten on 75 from 31 balls.

On the same night he lost his record for the highest score in BBL history, Stoinis also showed the Hurricanes no mercy.

He launched six balls over the rope, also taking 26 from a Tim David over as no Hurricanes bowler went at an economy rate below 10.

In reply, Hobart never looked interested in the chase as it finished at 6-167 with Ben McDermott top scoring with 55 from 33.

Maxwell’s knock will serve as a great ‘what-if?’ for Stars fans, after they finished the season at 7-7 and with two losses with the bulk of their squad out with COVID-19.

“The disappointment of the last week probably culminated in us playing with ultimate freedom,” Maxwell said on Seven’s coverage.

“It’s been a real tough year. I have had plenty of injuries, COVID, and pretty much every result go against us.

“A lot of things have to go right for that to happen. I had great support the whole way through.”

The astounding feat came on the same day as Cameron Boyce’s historic double hat-trick could not prevent Melbourne Renegades from a third straight BBL wooden spoon after a one-run loss to Sydney Thunder.

Boyce’s five-wicket haul capped one of the finest spells in the BBL’s 11 seasons, overshadowing Usman Khawaja’s 77 on return from the Ashes in Thunder’s 6-170.

Aaron Finch hit 82 from 64 balls in the chase, appearing to steer the Renegades home and hand Brisbane the spoon when the Renegades needed 13 off the final two overs.

But a late collapse left Boyce needing two runs off the last ball, only for the leg-spinner to be caught at gully off Gurinder Sandhu.

The result leaves the Renegades in last place on the BBL ladder, while Thunder’s tight win left it in third spot, missing the chance to host a home final.

Regardless of the result, it was Boyce’s afternoon at the MCG.

His figures of 5-21 were the best in the Renegades’ history, while it also marked the fourth-best return by an Australian player in the BBL.

Meanwhile, the Hurricanes’ loss means they still finish fifth and face Adelaide in an eliminator on Friday, but all of a sudden with a serious dent to their momentum.

The first three finals will each be played in Melbourne, with the challenger and decider to be at home venues.

Perth will use Marvel Stadium as their home, while locked out of Western Australia.

CHALLENGER: Loser of Qualifier v Winner of Knockout at TBC

FINAL: Winner of Qualifier v Winner of Challenger at TBC.

Glenn Maxwell smashes BBL record with 154no against Hobart Hurricanes