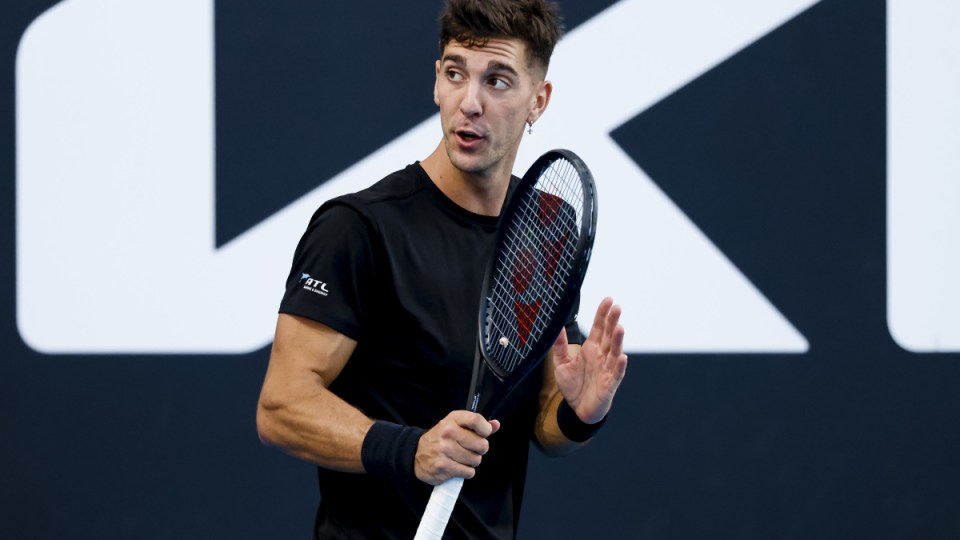 It didn’t go to plan for Thanasi Kokkinakis on Monday with a first-round exit at the Australian Open. Photo: Getty

How it can all change in just 48 hours.

Winner of his first ATP tour title in Adelaide two days before, Australia’s Thanasi Kokkinakis slipped out of this year’s Australian Open just before 8pm on Monday, losing in straight sets to the little-known Yannick Hanfmann.

It was an ignominious end to a startling fortnight that saw the 25-year-old win eight matches out of nine in two successive tournaments in South Australia.

But Melbourne proved a match too far despite the bear pit feel of court three that failed to propel him onwards.

Pretty flat after that😔Hurts I couldn’t get going today.. Thankyou for the support over the last couple weeks, has been incredible🙏🏼
Will try and be better for next year

Despite Kokkinakis dropping the first set in 33 minutes, huge queues snaked outside the people’s court where the atmosphere was white hot, baying, raucous support for the Aussie and little respect for his German opponent.

That said, it was a fair result, the Aussie gracious in his loss if defeated in part by his own success and an exhausting January schedule.

Kokkinakis’ four matches in successive days last week all went the distance including an epic semi-final against Marin Cilic in which he saved two match points and ended up winning at 12.18am on Saturday.

Whether he will admit it or not, it was too much.

Gauff was 8-1 in opening rounds at majors entering the match. pic.twitter.com/UvZ7qEJKnY

Seventeen-year-old American Coco Gauff may be another to regret her 2022 timetable.

A semi-finalist at the two successive WTA Adelaide tournaments already this year, she fell to the 110-ranked Qiang Wang in straight sets.

As with Kokkinakis she took her defeat in good heart.

“I was making more errors than I was used to, and it was also I feel like this is the first grand slam that I played a tournament before (that was) really close,” she said. “So I don’t know if I’ll do it again or not.”

There were other Australian success on day one.

Top seed Ash Barty breezed through her encounter with Lesia Tsurenko in 54 minutes but the greater plaudits will go to Aleksandar Vukic (the Australian player and not the Serbian president of the same name) who put out 30th seed Lloyd Harris in four sets before a full house and wildly supportive, court three.

It was the first win at a major for the 25-year-old Sydneysider and fully merited.

Vukic’s early success was the shot in the arm the tournament needed after the past week’s visa unpleasantries that have done little to enhance the sport.

Later, the ever-popular John Milllman advanced to round two after seeing off Spanish veteran Feliciano Lopez in four sets.

“You have to be playing amazing tennis against the top players,” said Millman of his next opponent, third seed Alexander Zverev.

🇦🇺 Aussie Aussie Aussie 🇦🇺@johnhmillman defeats Feliciano Lopez to reach the second round at the #AusOpen for the fifth time.#AO2022 pic.twitter.com/sv8qpCahBF

Major upsets were few on day one, the unwanted moniker perhaps going to the 11th seed and 2020 women’s champion, Sofia Kenin, who fell in straight sets to her in-form fellow American, Madison Keys.

Kenin has not had a happy time since winning in Melbourne two years ago and despite Keys’ 51 ranking, it would have been more of a surprise had Kenin prevailed.

If today is to be the end of a 20-year career for Sam Stosur (she will retire shortly) then she will have been given a show court send off, facing the American Robin Anderson at 11am on the sparkling new 5000-seat Kia Arena.

The choice of a major, if secondary, court to Rod Laver Arena is apposite.

The 2011 US Open champion, now 37, has underachieved always at Melbourne Park but has been a standard bearer for Australian tennis for so long and deserves one last moment in the sun.

Australia’s Storm Sanders, meanwhile, is not someone you might normally pick to see off the No.2 seed but, on Rod Laver Arena tonight, she has a chance.

The Belarusian Aryna Sabalenka is a fearsome opponent, a hard-hitting 23-year-old with 10 WTA titles already and an invariably winning serve.

Until late last year that is, when she developed what looks like a severe case of the ‘yips’, involuntary movements that pop up at just the wrong time.She has recent form here, exiting in the first round of consecutive Adelaide tournaments this month, first to world No.89 Kaja Juvan with an array of double faults and then, more remarkably still, to qualifier Rebecca Peterson when she served a mind-boggling 21 doubles.

Sanders, ranked 128, would in more normal times pose little threat, but should fancy herself today.

It may not be easy viewing and a prime-time showcasing, 7pm on Rod Laver Arena, may kill or cure Sabalenka’s affliction.

Elsewhere for the Aussies, men’s No.1 Alex de Minaur should see off Italy’s Lorenzo Musetti.

But all eyes will be on Nick Kyrgios, on his favoured court, John Cain Arena, way out at the back of Melbourne Park and a bastion of noise and colour.

Love him or not, Kyrgios comes with a panache and a bang.

Who else hot footed it in on a private jet, and bragged about it, as Kyrgios did from Sydney on Sunday?

Great Britain’s Liam Broady stands in his way with a likely, if unwanted bout, with the highest-ranked man in the draw, Daniil Medvedev, in round two on Thursday.