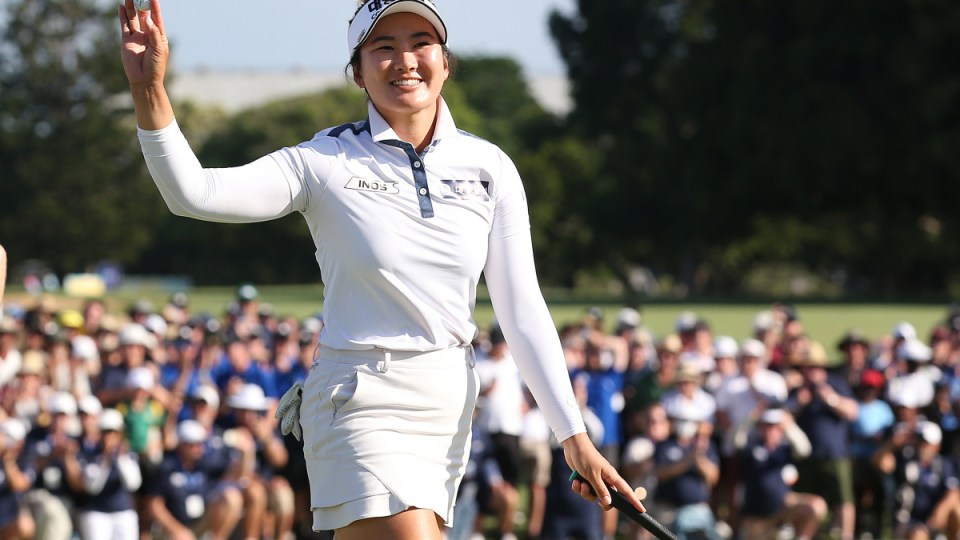 The new event saw 24 women split between men’s Australian PGA Championship groups for all four days at Royal Queensland Golf Club in Brisbane, competing for a $180,000 first prize – the same as for the men.

The hot tournament favourite after the late COVID-19 scratchings of Steph Kyriacou and Sarah Kemp, LPGA Tour regular Oh held her nerve after losing the lead midway through Sunday’s final round.

She shot a closing three-under-par 68 to win at 10 under to be the first name engraved on the Karrie Webb Cup.

The 13th hole proved the difference as Oh putted from off the green to birdie just minutes after Kim had double bogeyed from a similar spot.

Impressive youngster Kim threatened before that fatal moment but still shot a one-under 70 to finish runner up, while Sarah Jane Smith (72) was two shots further back in third.

Oh had queried the weekend format that meant the leading women were not grouped together.

But, after purposely not looking at any leaderboards on Sunday, she was all smiles when she made a 10-metre birdie putt on the 18th to finish in style.

It’s the 25-year-old’s first title since stunning the field in her second professional event at the Australian Ladies Masters in 2015.

“It was different; when I won at Royal Pines (in 2015) I didn’t go into the week trying to win. I just played. It was like my first pro event and I ended up, like winning,” she reflected.

“This week, when I decided to play, I wanted to come and win and hopefully put my name on the Karrie Webb Cup.

“So I think it means a little bit more and a bit of confidence in myself that I can get it done.

“It was a small field, but it had good players and it came down to the last six, seven holes.”

Kim had made five birdies in six holes to lead by one before her slip on on the par-four 13th, when her approach travelled marginally long to skip off the back of the green.

She then chipped back off the other side of the putting strip and chipped again before missing her long bogey putt to walk away with a costly six that proved too tough to claw back from.

“It just happens I guess. You just slip here and there, just a couple of hiccups but in the end, it’s all good,” said the 21-year-old, who later showered the victor in sparkling wine.

“You come to these tournaments, especially these big ones, wanting to win. I had that passion in there, but in the end she did play solid.”

Oh will share a celebratory drink with Webb in coming weeks, with the seven-time major winner set to play the Gainbridge LPGA in her Florida home town later this month.