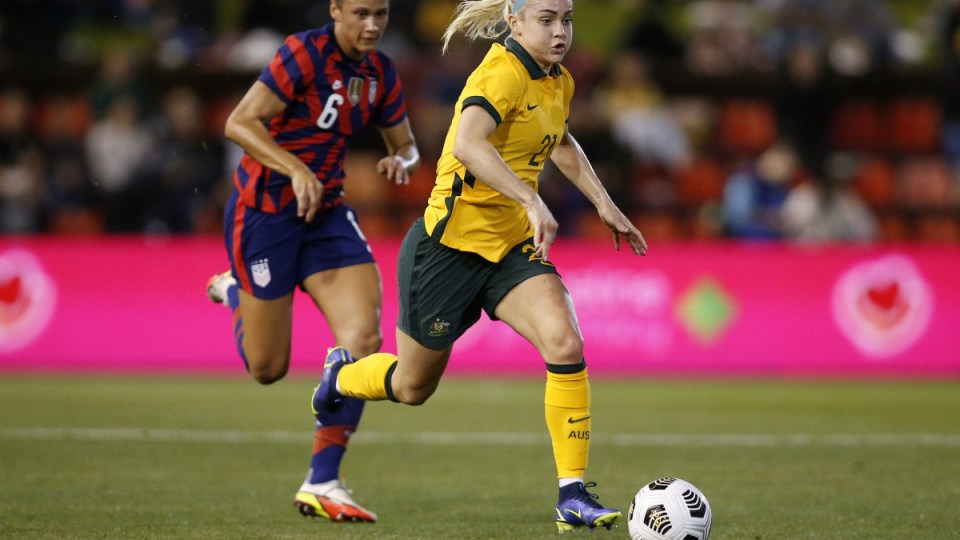 Ellie Carpenter says the Matildas have their defensive structures in order ahead of the Asian Cup. Photo: AAP

Ellie Carpenter is confident the Matildas have ironed out their defensive frailties under coach Tony Gustavsson as they ramp up preparations for the Asian Cup.

The Matildas leave Dubai for India on Monday where their bid to lift Australia’s first Asian Cup since 2010 starts with a clash against Indonesia on Friday night (AEDT).

Gustavsson has aimed to play a progressive brand of football since taking charge of Australia at the start of last year, but so far his tenure has yielded just three wins and the Matildas have kept just two clean sheets in 16 games.

Things got so bad in a recent loss to the USA that Carpenter, who is usually a marauding full back, was forced to fill in at the centre of defence.

"Having this pre-camp here in Dubai, I think is going to be great for us when we hit the ground running in India."

Hear from @stephcatley and @kyahsimon as our #WAC2022 preparations continue in Dubai!

But the 21-year-old says they have put those shortcomings behind them as they aim to go one better than 2018’s finish as runners-up.

“(In) the last couple of games, we were testing out a few new players along the backline,” she said.

“That’s one area we are looking for depth. This is a tournament now and we are ready, and one of our goals (in) this tournament is to keep clean sheets.

“I think that’s what we are ready for and us defenders know that. We’re getting down to business in this tournament and we’re not too worried about goals we’ve conceded in previous games.”

Gustavsson has always stressed friendlies against the USA and Brazil at the end of 2021 were about what he terms “preparation mode”.

Now the Matildas are in “tournament mode” and Carpenter, who was part of that 2018 final loss to Japan and a fourth-placed finish at the Tokyo Olympics, says the side were comfortable with the expectation they could win it.

“We haven’t won since 2010. We need to win this and we know we can if we play our best football,” she said.

“We know what we need to do to lift that trophy and we want to bring it home.

“Off the back of our Olympic campaign, I think there’s a little bit of expectation for us to win this Asian Cup.