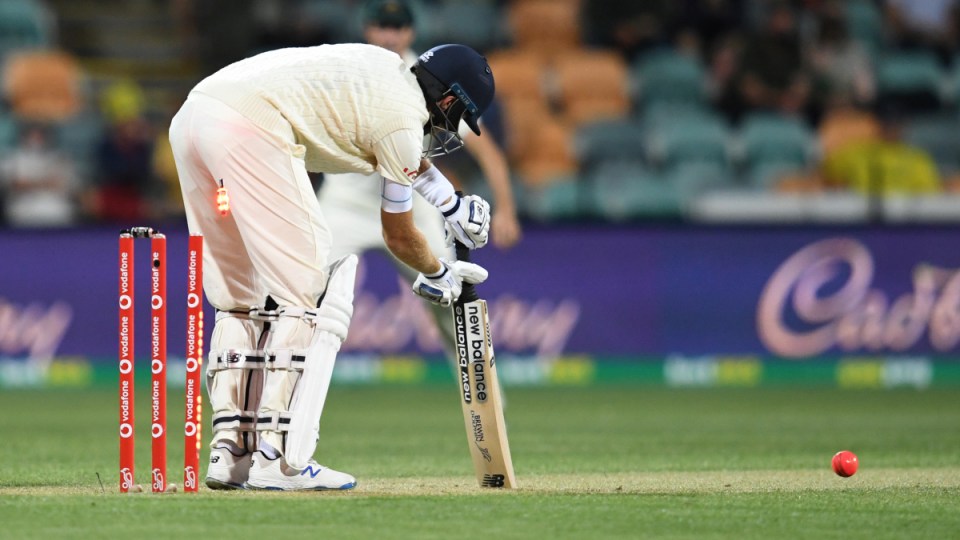 Joe Root is bowled as England collapses late on the third day of the fifth Ashes Test in Hobart. Photo: AAP

Cameron Green has busted open the fifth Ashes Test, igniting an embarrassing collapse of 10-56 that delivered Australia a 4-0 series win over England in Hobart on Sunday.

Rory Burns and Zak Crawley logged the tourists’ highest opening partnership of the five-Test series, advancing to 0-68 on day three of the series finale.

But England’s bright start to its pursuit of 271 was followed by two hours of bumbling and bungling at Bellerive.

Pat Cummins and his team was toasting their triumph before switching attention to a white-ball series against New Zealand later this month.

Test tours of Pakistan and Sri Lanka then await, with Cummins determined to ensure his side secures a spot in the 2023 world Test championship final.

“To be the best side in the world you have to win at home but, almost more importantly, you need to be successful overseas,” Cummins said in Hobart.

“That will be our challenge. I feel we are really well suited with a squad of 15 plus extras, who aren’t here and can offer a lot in those conditions.

“This is hopefully the beginning. I feel we’re all in a really good place.

“There’s no imminent retirees, so hopefully we’re building something big the next few years.”

There it is! England lose TEN for FIFTY SIX.

Australia win the fourth Test by 146 runs, and the series 4-0!#Ashes pic.twitter.com/tSmgbKlb3u

The catalyst for chaos as the sun set on Sunday had come from Green, who has long been regarded as Australian cricket’s brightest prospect.

Root grinned in disbelief then threw his head back after the pink ball hit a crack and struck the bottom of off stump, knowing there was nothing he could have done to stall Australia’s push for victory.

An emotional Root said afterwards that he believes he is the right man to lead England out of the abyss, saying he would like to remain captain.

“I’d love the opportunity to take this team forward and to turn things round,” he said.

“At the moment, we’re going through a real tough stage as a group of players.

“The performances haven’t been good enough but I’d love the opportunity to turn things round and for us to start putting in performances you’d expect from an English test team.”

"It's been embarrassing. Gutless."

Nathan Lyon, who failed to deliver a single over for the first time in his 105-Test career, plucked a low diving catch in the deep to dismiss Stokes.

Cummins and Boland then sliced through the middle order and cleaned up the tail with remarkable ease, triggering jubilant celebrations.

Cummins threw the ball to Green as the belief of England, desperate to bank their first Test win in Australia since 2010-11, ballooned.

The all-rounder, having delivered 44 wicket-less overs against India in his debut series, quickly captured the scalps of Burns, Crawley and Dawid Malan in a six-over spell either side of tea.

The 22-year-old also produced a nasty bouncer that kept low and struck Malan on the helmet as the No.3 batter tried to take evasive action.

There was a lot of pre-series talk about it being unfair to compare Green with Stokes, yet the reality is the young gun has outperformed England’s talismanic all-rounder with bat and ball this series.

Green’s inspired spell came on the same day he scored 23 while adding 49 runs alongside Alex Carey, sharing Australia’s best partnership in a slapdash second-innings total of 155.

357 runs at an average of 59.5! A huge congratulations to Travis Head, who wins the Compton/Miller Medal as Player of the Series 🇦🇺@travishead34 | #Ashes pic.twitter.com/kzFIoMb5j0

Carey scored 49 and stood up as express paceman Mark Wood snared career-best figures of 6-37, top-scoring with some help from a divisive decision by third umpire Paul Reiffel.

Carey was on 19 when he chopped on, only for Chris Woakes’ delivery to be judged a no-ball after Reiffel studied every angle possible.