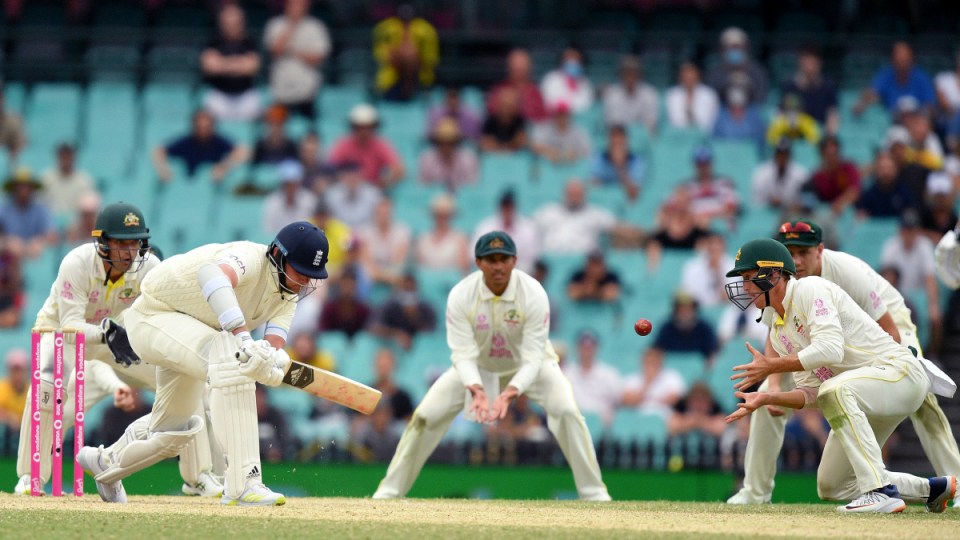 A battered England has dug deep to salvage some pride and a dramatic draw at the SCG, where the tourists’ final-wicket pairing hung on for two overs to deny Australia in the fourth Test.

The result ends Pat Cummins’ hopes of captaining what would have been just the fourth 5-0 Ashes sweep in the storied 145-year history of Test cricket.

Ben Stokes and Jonny Bairstow pushed through the pain barrier to provide the most significant resistance on Sunday, facing a combined 228 deliveries.

A brilliant Test match ends in a draw.

Stuart Broad and Jack Leach then stood up in a nail-biting finish under lights, chewing up 8.4 overs in their ninth-wicket stand.

But the introduction of Steve Smith’s leg-spin, prompted by umpires telling Cummins that light was too poor for anything but spin with three overs remaining, added another dramatic twist.

Smith captured the wicket of Leach with his sixth delivery, a well-flighted beast that took the edge, deflected off Alex Carey’s glove and sailed to David Warner.

That was some afternoon of #Ashes cricket!

Take a breath, Aussie fans. We head to Hobart with a 3-0 series lead 🇦🇺 pic.twitter.com/NQn0Z37jB7

The timing of Cummins’ declaration remained a talking point throughout a tense Sunday, when a rain delay after lunch resulted in seven overs of play being lost.

Cummins’ call is certain to be heavily scrutinised, as are the various bowling changes and fields set in a gripping finish.

The skipper even donned a helmet as Australia crowded the bat in Lyon’s final few overs, desperately trying to conjure a breakthrough.

Cummins took matters into his own hands with the second new ball, generating incredible swing to blast out Jos Buttler and Mark Wood in the space of three deliveries.

Australia, which retained the urn with crushing wins in Brisbane, Adelaide and Melbourne, will rue several factors that helped England escape after Usman Khawaja’s twin tons.

The hosts lacked a clinical edge in the field, with missed chances to dismiss the resilient and resolute pair of Stokes and Bairstow proving notably costly.

Marcus Harris put down a catch in the shadows of lunch, when Stokes was on 16 and nudged the ball to the under-pressure opener at short leg.

Bairstow was on three, having just been summoned to the middle after Scott Boland removed Joe Root, when Lyon missed a chance to run the first-innings century maker out with a direct hit.

Smith grassed a tough slips catch, when Bairstow was on 28.

Stokes was bothered by a side injury that continued to cause obvious discomfort, while Bairstow batted with a thumb injury that could force him to miss the fifth Test that begins in Hobart on Friday.