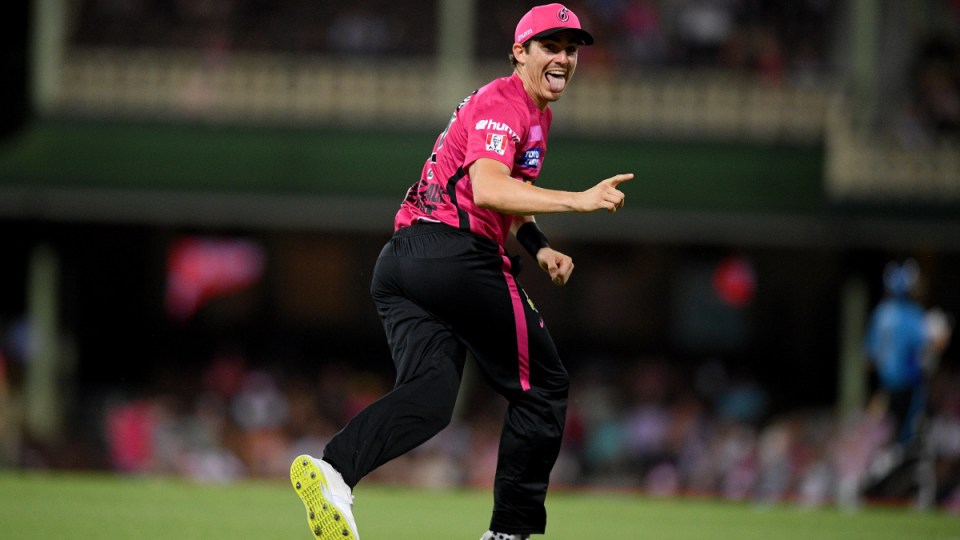 Sean Abbott was man of the match after leading Sydney Sixers to a win over Adelaide Strikers. Photo: AAP

New dad Sean Abbott has celebrated the biggest BBL milestone of his career in style, excelling with ball and bat to help Sydney Sixers edge Adelaide Strikers by four wickets at the SCG.

Man-of-the-match Abbott faced 10 balls, struck two boundaries and finished unbeaten on 19 to shepherd the Sixers to a victorious 6-150 from 19.2 overs, extending their bright start to the season.

The fast-bowling all-rounder, playing his first match at any level since last week’s birth of baby Ella, also snared three wickets to boost his BBL career tally to 112 scalps.

Abbott became the league’s all-time leading wicket taker, overtaking Ben Laughlin on that list when he removed Adelaide’s top scorer Thomas Kelly with the final delivery of their innings.

History made at the SCG.

The Sixers, pursuing a third straight title, now boast a 4-1 record ahead of their Boxing Day derby against Sydney Thunder.

Kelly’s knock of 41 helped the visitors scrap together a total of 8-147.

Leg-spinners Rashid Rashid and Fawad Ahmed wrestled momentum back whenever the Sixers looked to be in control of a stop-start chase.

The most obvious example came when stand-in skipper Peter Siddle threw the ball to Rashid, asking the prized recruit to deliver the 17th over.

Moises Henriques and Jordan Silk had just taken 24 runs from the power surge, leaving their side needing 33 runs from 24 balls.

🗣️ "I'm pretty grateful and fortunate to be in the environment that I am at the Sixers for such a long time now."

The Sixers’ equation blew out to 30 runs from 18 balls after Rashid removed Henriques and Dan Christian with consecutive deliveries, giving his side a sniff.

Silk went down swinging at George Garton, but Abbott crashed consecutive boundaries off Garton to put his side in the box seat.

Hayden Kerr smashed the winning runs by clattering a delivery from Siddle over the mid-wicket fence.

Dan Christian, who welcomed the arrival of baby Harper a fortnight ago, also celebrated fatherhood with a bag of wickets after Siddle opted to bat first.

Christian snared astonishing figures of 3-8 from three overs, halting the visitors’ momentum after Jon Wells and Matt Renshaw marched their side to 2-84.

The table-topping Sixers were forced to omit Steve O’Keefe (calf) and Tom Curran (back) from the XI that defeated Melbourne Stars at the MCG.