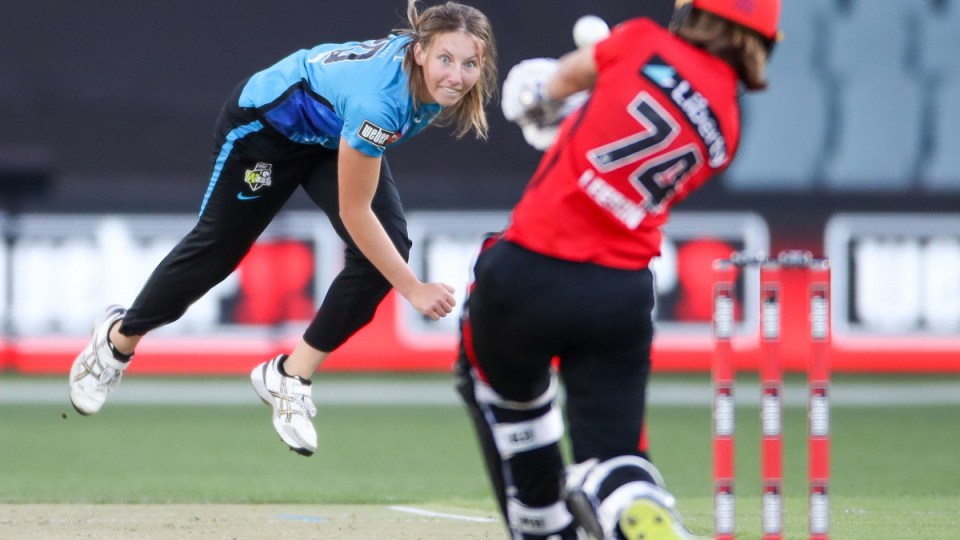 Adelaide Strikers have belted their way into the WBBL final with a crushing nine-wicket win over Melbourne Renegades.

The home side dominated Thursday night’s ‘Challenger’ match at Adelaide Oval from the outset and never relented, bringing up the victory with 55 balls to spare.

After winning the toss and electing to field, the Strikers restricted the Renegades to a paltry 8-83 – the fourth-lowest total in their history – to book their spot in Saturday night’s decider against Perth Scorchers.

Strikers openers Dane van Niekerk (43) and Katie Mack (31 not out) were intent on having as much rest as possible before the final, treating the Renegades’ demoralised bowling attack with disdain.

The cream has risen to the top. Over to you Perth, time to #FillTheFurnace!

Van Niekerk copped a nasty hit to the hand but managed to bat on before being caught 12 runs short of the target.

“It’s incredible because we had four losses somewhere in the middle of the season,” van Niekerk told the Seven Network.

“It’s very hard to think you could make a final if that happens, but everyone stayed positive and backed their preparation.

The Renegades were immediately under pressure, with Strikers quick Megan Schutt (2-23) on song from the first ball of the match.

It did not get any better for the Renegades as all Strikers bowlers got in on the action.

Not even Indian star Harmanpreet Kaur, who was named as the tournament’s leading player, could rescue the Renegades as she was trapped lbw for seven.

Congratulations @ImHarmanpreet for being named the WBBL Player of the Tournament. 👏 pic.twitter.com/wr7LQwhsJp

Sophie Molineux did not bat after opening for much of the tournament and the Renegades captain is believed to be carrying an injury.

Renegades bowler Holly Ferling, who played 34 times for Australia across three formats, was seen leaving the field in tears in what was expected to be her final game of cricket.

Our journey comes to an end for #WBBL07, but it's been an incredible ride.

To our players and staff, thank you for your commitment

And to all our fans at home cheering loudly, we can't wait to see you at @WBBL
games in Victoria next year Folded hands #GETONRED pic.twitter.com/gAim9SRJe0

The Scorchers finished the tournament on top of the table and will go into the decider as warm favourites playing in front of their home crowd.