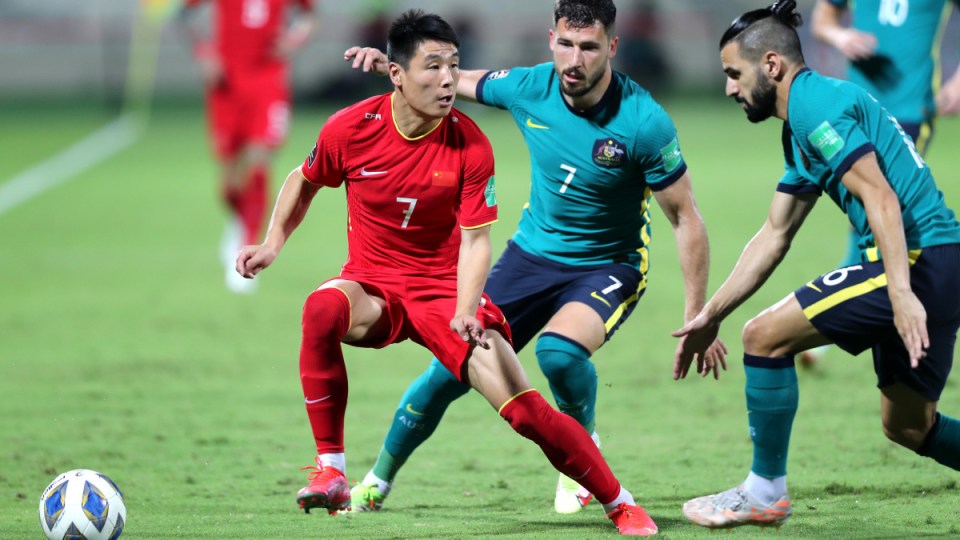 China failed to threaten in the early stages of the second-half, but Australia's failure to extend their lead was punished with 20 minutes to go. Photo: Getty

Graham Arnold’s “sloppy” Socceroos are facing a much tougher journey on the road to next year’s World Cup after being held to a 1-1 draw in their latest qualifier with China.

A second-half penalty after referee Adham Makhadmeh used VAR to rule a handball against James Jeggo cancelled out Mitch Duke’s first-half opener in Sharjah as Australia made it three qualifiers in a row without a win.

That result, combined with Japan’s victory over Oman in Muscat, means the Samurai Blue have leapfrogged Arnold’s team in Group B and into the second automatic berth for Qatar 2022.

Having lost to Japan in Saitama last month and then drawing 0-0 with group leaders Saudi Arabia in Sydney last week, Australia headed to Sharjah knowing a return to winning ways was vital.

Arnold made two changes to the team that faced the Saudis, picking Milos Degenek to replace the injured Harry Souttar and giving the in-form Duke a start in place of Awer Mabil.

The decision to play Duke paid dividends in a scrappy opening half, when the Japanese-based forward got on the end of a Martin Boyle cross in the 38th minute to nod home from the edge of the six-yard box.

While China failed to threaten in the early stages of the second-half, Australia’s failure to extend their lead was punished out of the blue with 20 minutes to go.

Called to the sideline monitor by the VAR official, Makhadmeh deemed Jeggo to have handled as he tried to clear a free-kick in the air and awarded a penalty.

Spanish-based star Wu Lei stepped up and made no mistake with the spot kick as he blasted past Mat Ryan to secure the fifth-placed Chinese a share of the spoils.

“We were a bit sloppy at times but you know until the penalty there was pretty much only one team in the game,” a frustrated Arnold told Network 10.

“That penalty gave them energy.

“We moved the ball well. We created some decent chances and we’ve just got to be positive and move forward.”

Duke, who has now scored five goals for the Socceroos this year, was in no mood to celebrate as he rued the dropped points.

“Frustrating, always, when you go one-nil up and then you concede and finish with a draw,” the striker said.

“It was an important game that we needed three points (from) and very frustrating to go away with just the one.”

The Saudis are in the box seat to top the group and claim one of the two automatic qualifying places after they defeated last-placed Vietnam 1-0.

That leaves the Green Falcons four points clear of Japan, who are second with four wins and two losses from their six matches, with Australia a further point back in third.

The Socceroos next qualifiers are a home clash with Vietnam on January 27 before travelling to the Middle East to face Oman on February 1.

In the other Asian qualifying group Iran and South Korea both won to give them a ten and eight-point cushion, respectively, in the automatic qualifying places.

UAE are currently in third place, which would be Australia’s first hurdle were they to remain third in Group B. The winner of this play-off would then face a two-legged inter-confederation play-off against a team from either the Americas or Oceania.