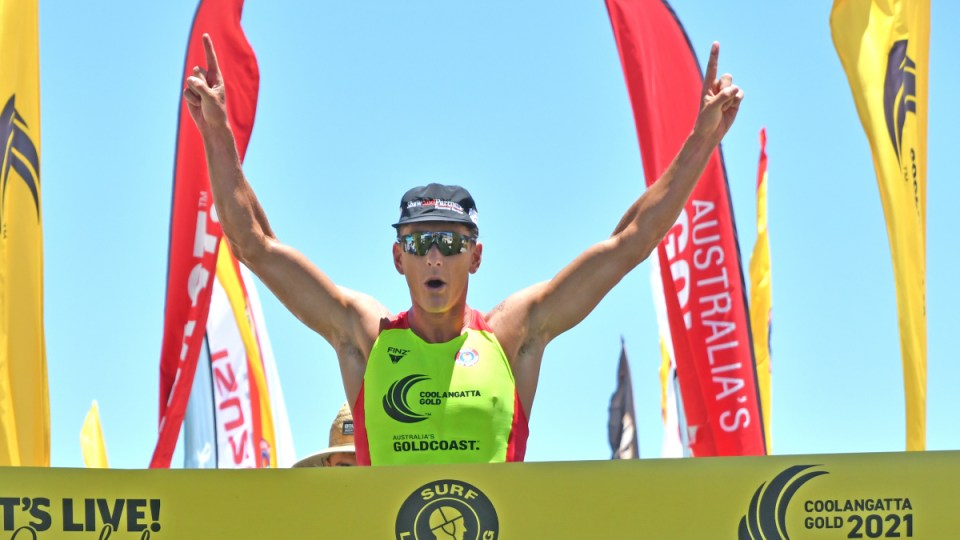 With his one-year-old son in his arms, surf lifesaving superstar Ali Day has added another chapter to his own legend by winning a seventh Coolangatta Gold on Sunday.

In one of the most dominant displays in the history of the iconic 41.8-kilometre endurance race, Day simply blew away the field on the Gold Coast.

Such was the margin between Day and his rivals, he had time to scoop up son Danny in the victory chute and carry him to the finish line.

It extends Day’s record of having never been beaten in any Coolangatta Gold he’s contested since his breakthrough win in 2012.

It also continues a remarkable return to the sport after a freak double-wrist fracture in 2019, which sidelined Day for 12 months and left him battling depression.

“I watched the race in 2019 at Mermaid Beach with two casts on my wrist and it was one of the worst days of my life to have to sit and endure that,” he said.

“There’s definitely moments over the last few weeks where (wife) Kel showed me photos of that and today wasn’t about winning, it was about just being able to have the opportunity to get back out there.”

Racing on a compacted course due to COVID-19 travel restrictions limiting the number of interstate entrants and volunteers, Day emerged from the 23-kilometre surf leg neck-and-neck with defending champion Matt Bevilacqua.

Having done his swimming training under the guidance of Olympic champion Kaylee McKeown’s mentor Chris Mooney, Day was too strong on the 3.5-kilometre ocean swim and opened up a commanding lead by the time he returned to Coolangatta beach.

He set off for the final 8.2-kilometre run leg six minutes clear of the field, enabling him to soak up the atmosphere with his son and wife in the final hundred metres.

“Obviously you never like to think if you’re going to win, what you should do, what your victory claim would be but in the back of my mind, I won’t lie … if I got the chance I was going to grab him for sure,” he said.

“Just a really special moment for for my family.”

Day paid tribute to both his competitors when asked if the lure of winning 10 Golds was on his mind.

“People are throwing out 10 that’s for sure, but look it takes a lot of energy, effort – mental, emotional – everything,” he said.

“Today is obviously the icing on top, but who knows?”

A proud Courtney Hancock has erased her demons from last summer, running down her rivals to claim a historic fourth Coolangatta Gold crown.

The 33-year-old’s victory came despite being more than a minute behind leader Danielle McKenzie heading into the final 8.2-kilometre run leg of the 41.8-kilometre surf lifesaving endurance on Sunday.

With defending champion Lana Rogers succumbing to exhaustion and withdrawing during the run and 2018 winner Georgia Miller unable to keep up the pace, Hancock caught up with McKenzie at the turn.

The pair then ran neck and neck over the next four kilometres back to Coolangatta Beach before it was Hancock who found that little bit extra to become the first woman to win four Golds in the event’s history.

Victory was made all the more sweet after a disastrous Ironman series last summer in which Hancock, the three-time champion, finished a lowly 11th overall.

“I can probably stand here and say that was my proudest one yet,” Hancock said.

“I lost it just at the end there really and then I kind of in my mind – they talk about in sport those moments, and you don’t have them often, but it’s like how bad do you really want this.

“And I was like, ‘yeah, I really want this one. I’m not going to be happy with second’.”

#CoolieGold2021 | @courtney_hancock_ is now the most successful female athlete to every take on the Coolangatta Gold! With today's victory, she now stands above Hayley Bateup and Elizabeth Pluimers with 4 gold medals around her neck. #thisisqueensland #playgoldcoast pic.twitter.com/3zSZklZPRA

Hancock said the disappointments of the 2020-21 Ironman series were a major inspiration – as she surpassing three-time Coolangatta Gold champions Hayley Bateup and Elizabeth Pluimers.

“I definitely walked away from the series incredibly disappointed,” she said.

“We won’t go into that, I never make excuses, but I certainly wasn’t racing like myself.

“It was a part of me that was like, that’s not me. I know there’s more in here and it’s nothing to do with age. I knew it wasn’t.

“I want to do it because I love this sport and one day I’m not going to be able to do it.

“So I wanted to tick that off.”