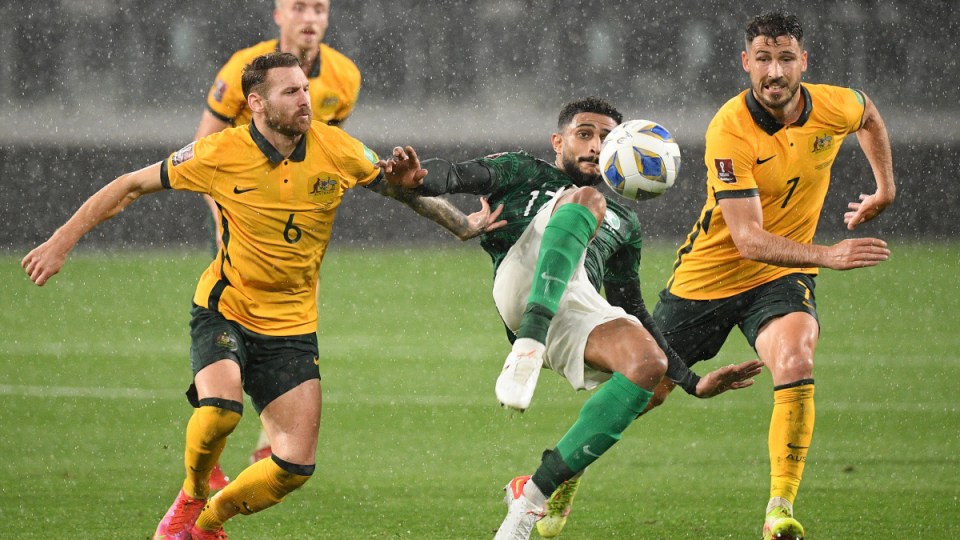 The Socceroos and Saudi Arabia have played out a 0-0 draw in a rain-soaked World Cup qualifier. Photo: AAP

There was no happy homecoming for the Socceroos as they lost defender Harry Souttar to a suspected knee injury in a 0-0 draw against Saudi Arabia.

After 763 days away from home, Australia lacked the cutting edge to get a much-needed win in Group B before Tuesday’s clash with China in the UAE.

While the result is not terminal for Australia, it has certainly made things harder for Graham Arnold’s men in their quest for automatic qualification.

The Saudis remain three points clear at the top of the group and Japan is likely to be the main beneficiaries from the Socceroos’ wastefulness at a rain-swept Commbank Stadium in Sydney.

"I think overall we played well, we created the chances but they didn't go in tonight" – @Socceroos coach Graham Arnold on his sides 0-0 draw with Saudi Arabia #AUSvKSA #AsianQualifiers pic.twitter.com/QxReqArn9P

Martin Boyle and Awer Mabil enjoyed luck down their respective sides early on, but whenever the Socceroos moved forward they were surrounded by a swarm of Saudis dropping deep.

The Green Falcons were able to absorb everything Australia threw at them and turned to Salem Al-Dawsari as their attacking fulcrum down their left.

There were times when the winger got the better of Rhyan Grant at the byline but he frequently cut in-field looking for space.

It was there that he gave the visitors their best chance, slipping into open field and floating a ball over the Australian defence to Salman Alfaraj.

Souttar was on hand to block the effort and Australia, who enjoyed the better opportunities in the first half, went on the attack.

While the build-up play was impressive and there was an intent to make use of the home advantage, the Socceroos failed to use the weight of possession to their benefit.

Leckie and Jackson Irvine failed to convert with promising chances in the second half with Mabil testing goalkeeper Mohammed Alyami from a free-kick.

Boyle was there on the follow-up but could only shoot at the keeper before a wicked deflection ricocheted off Abdulellah Al-Malki and just over the crossbar.

The Saudis were able to withstand everything Australia could conjure, and as fatigue began to set in they looked to take advantage.

They might not have qualified for Qatar just yet, but the Saudis played like a team in tournament mode.

Herve Renard has a track record of getting the best out of lesser footballing nations and his side, but for a few moments, defended admirably, took time out of the clock with some tactical play-acting and then looked to counter.

Al Faraj tested Mat Ryan against the run of play and as the Socceroos No.1 smothered the Saudi attack Souttar signalled for treatment.

The Stoke defender went down holding his knee and after a lengthy break was stretchered off and replaced by Milos Degenek.

Ryan was called upon to deny Saleh Al-Shehri and Al-Dawsari late on but neither side were able to find the back of the net.