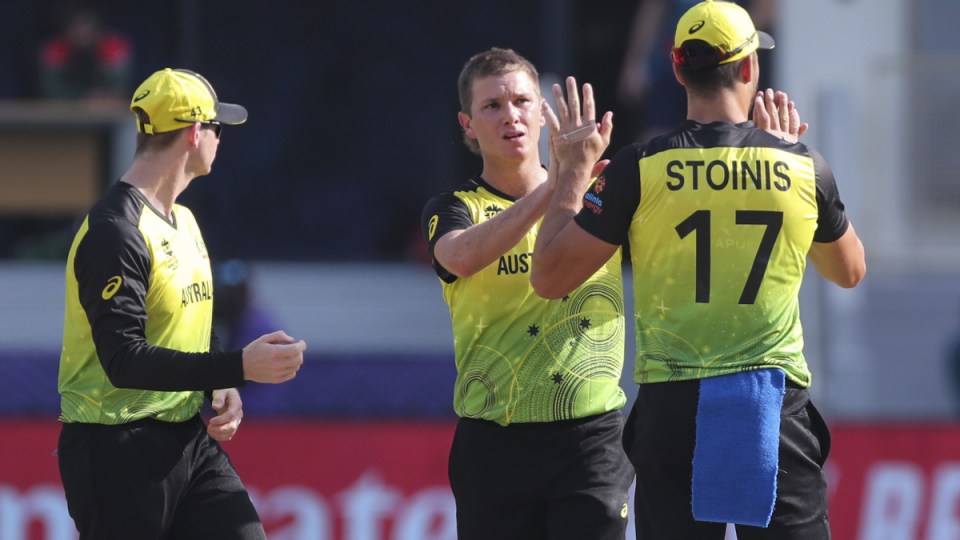 Australia has chased down Bangladesh’s paltry total of 73 inside seven overs to win by eight wickets and keep alive their hopes of reaching the Twenty20 World Cup semi-finals.

Coming off a humiliating loss to England, Australia responded in devastating fashion on Thursday night by cantering to its third victory of the tournament with an extraordinary 82 balls to spare.

Saturday night’s thrashing by the old enemy meant Australia cannot afford any more slip-ups if it is to progress to the final four.

But the Aussies could not have been more impressive in smashing a shell-shocked Bangladesh in Dubai.

It turns out chasing down a target in 6.2 overs does really good things for a net run rate #T20WorldCup pic.twitter.com/JjuReVzJNZ

Australia now needs to defeat the West Indies on Saturday and hope England takes care of South Africa to be assured of a place in the semi-finals.

Such was the size of the victory against Bangladesh, Australia may prevail on net run-rate even if South Africa does upset England.

It was Bangladesh’s second-lowest total at a T20 World Cup, just ahead of their 70 against New Zealand in 2016.

Finch (40) and fellow opener David Warner (18) batted with freedom as they eyed the low target.

The pair were the only Australian batters to lose their wicket as Mitch Marsh and Glenn Maxwell were in the middle when the win was secured.

Marsh (16 not out) brought up the victory with a powerful pull shot that went for six.

Zampa could have easily had six wickets after wicketkeeper Matthew Wade put down an edge off Taskin Ahmed to deny the leg-spinner a hat-trick.

He finished with the second-best figures – only behind Ashton Agar’s six wickets earlier this year – by an Australian in T20 internationals.

Mitchell Starc’s wicket with the third ball of match set the tone for a polished performance in the field.

Australia’s bowling unit did not allow Bangladesh to settle, as Starc and Josh Hazlewood picked up two wickets each.