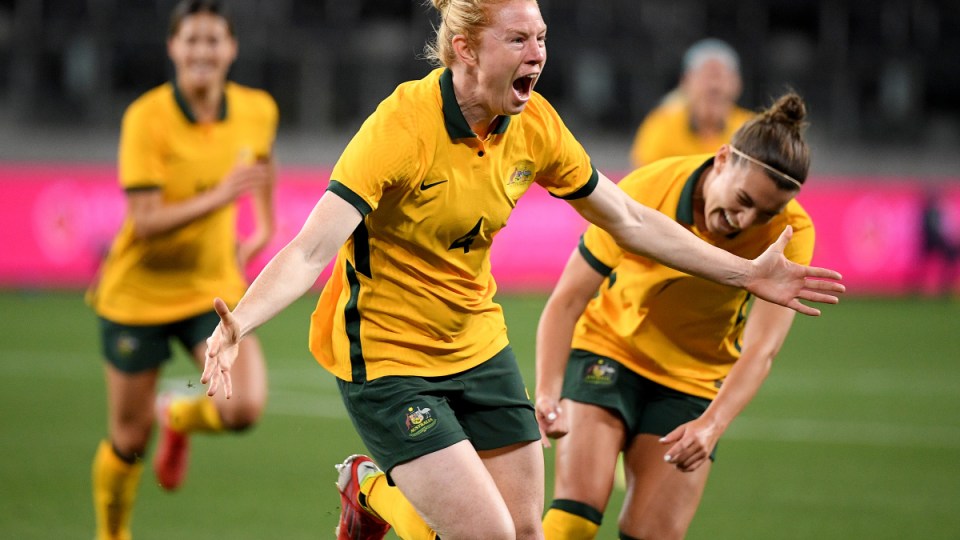 Clare Polkinghorne celebrates her opening goal for the Matildas but Brazil fought back to draw 2-2. Photo: AAP

The Matildas’ wait for back-to-back wins under Tony Gustavsson continues after his side surrendered a two-goal lead against Brazil to draw 2-2 in Sydney on Tuesday night.

The home side surged ahead through Clare Polkinghorne before Sam Kerr netted in the second half to move within one goal of equalling Tim Cahill’s record of 50 Australian goals.

But a seven-minute blitz after Kerr’s effort sunk Australian hopes of consecutive wins under the Swede.

A header from Erika got the visitors back in the game before Debinha brought them level to the delight of a rowdy group of exiled Brazilians.

There were encouraging early signs for Australia who asked questions the visitors were struggling to answer with Ellie Carpenter and Kerr both creating clear-cut chances, but Caitlin Foord was unable to convert.

Australia’s sustained pressure in the first 10 minutes eventually yielded results when a corner was cleared into the path of Kyra Cooney-Cross.

She fired a shot into the middle of a packed penalty box with a poor clearance falling to Polkinghorne, who for the second time in the space of a week, turned in Australia’s opener from close range.

The defender wheeled away in celebration, but no sooner had Australia scored then Brazil clicked into gear.

.@samkerr1 adds our second of the night!

Can we talk about that nutmeg though 👀

Brazil, who started both Marta and Debinha after restricting their minutes last Saturday, responded by pressing Australia into mistakes.

The Matildas were forced to go long which worked in Brazil’s favour, with Adriana firing a warning shot of what was to come when she escaped the attentions of Cooney-Cross.

The Brazilian shot to Lydia Williams’ left with the Australian No. 1 well beaten, only for the ball to ricochet off the woodwork and fizz clear of danger.

Kerolin, Antonia and Debinha had chances, while Marta was ruled offside on one promising run just before the half-time break.

Australia came out with renewed energy as Carpenter marauded down the right to find Kerr in the box.

With a simple touch, the Chelsea striker unleashed a low driving shot past Leticia in the 53rd minute to notch her 49th for Australia, with a mooted friendly against the USA on home soil next month offering her a chance to surpass Cahill’s haul.

But any suggestion Brazil would simply fold after Australia’s second were put to bed when Erika headed home unmarked at a corner in the 64th minute.

They had their second to square the game up just a few minutes later when Williams flapped at a miscued Tamires cross.

Williams parried onto the bar and fell into the goalmouth, allowing Debinha a clear chance to make it 2-2 and set up an enthralling final 20 minutes.

Marta and Kerolin had the best opportunities as Brazil pushed forward in search of a third, but Australia’s defence was able to repel their efforts.