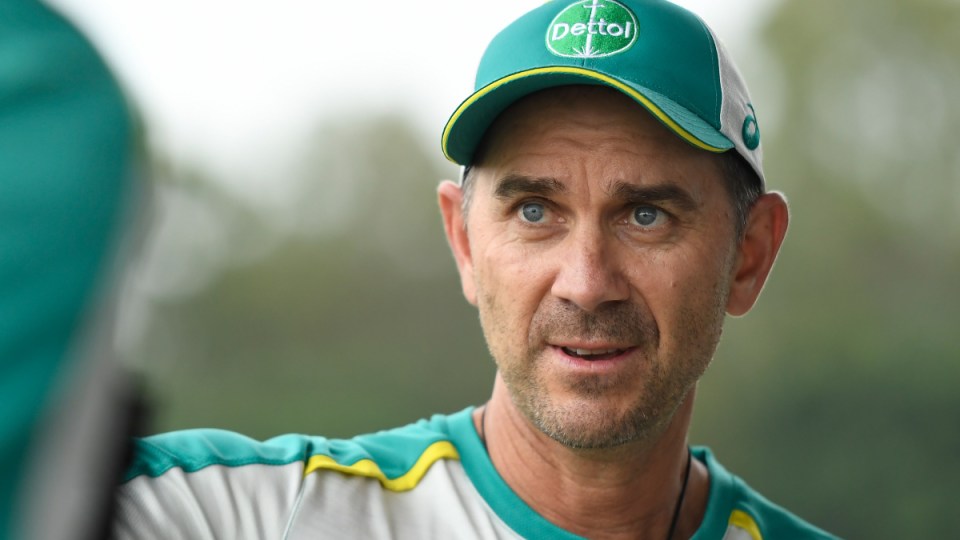 Justin Langer says he has shown he is ready to delegate more often after being “humbled” by public questions over his future as Australia’s coach.

Langer’s Twenty20 World Cup campaign got off on the right foot against South Africa on Saturday night, pulling the right rein in going with seven specialist batsmen and three quicks.

It is the first series in a big summer for Australia that also includes a home Ashes before Langer comes off contract next year.

Langer’s future had become a point of contention following last summer’s home Test series loss to India and T20 series defeats with an understrength side in West Indies and Bangladesh.

A winning start to the #T20WorldCup!

We take the win over South Africa by five wickets in Abu Dhabi. pic.twitter.com/huHaNEKPfT

Player unease became apparent, prompting high-powered meetings between the coach and senior members of the team.

Langer insists those conversations were “the best” he’d had in 10 years of coaching, while Test captain Tim Paine emerged declaring a united show of support.

Langer for his part has made more of a point to share the load, handing more responsibilities to his captains and even skipping a training session last week as he worked on team strategy at the team hotel.

“I don’t think it’s difficult to delegate. It’s just that my personality is I want to be involved with everything,” Langer said.

“And that’s part of the job.

“It’s been liberating to have great people around. I’ve always had it. But we’ve got great leaders and I’ve got amazing support staff.

“So it was nice to have an afternoon off from training because usually I’ve rolled my sleeves up, getting in amongst it.

“It was nice to be back here, preparing for South Africa, and doing all the analysis and everything. And it was good, it’s working out well.”

Player of the Match is Josh Hazlewood for his figures of 2/19 (4), including the key wicket of Quinton de Kock and featuring 15 dot balls #T20WorldCup pic.twitter.com/w1cJzgkEyc

Langer said he had only embraced the meetings with players and the need to adapt entering his fourth year as coach.

He also spoke with several coaches across a number of sports over their philosophies, including Trent Robinson in the NRL and Adam Simpson, and Alastair Clarkson in the AFL.

But he admitted the public questions over his position was different.

“It was a humbling period, probably since January, if I’m completely honest,” he said.

“But that’s OK. I’ve got a very curious mind and I’ve had to adapt a lot.

“My philosophy throughout my whole life has been about honest conversations and honesty.

“And because of that I’ve got incredible mentors in my life.

“The public commentary was the most humbling thing. The conversations behind closed doors, that wasn’t confronting.