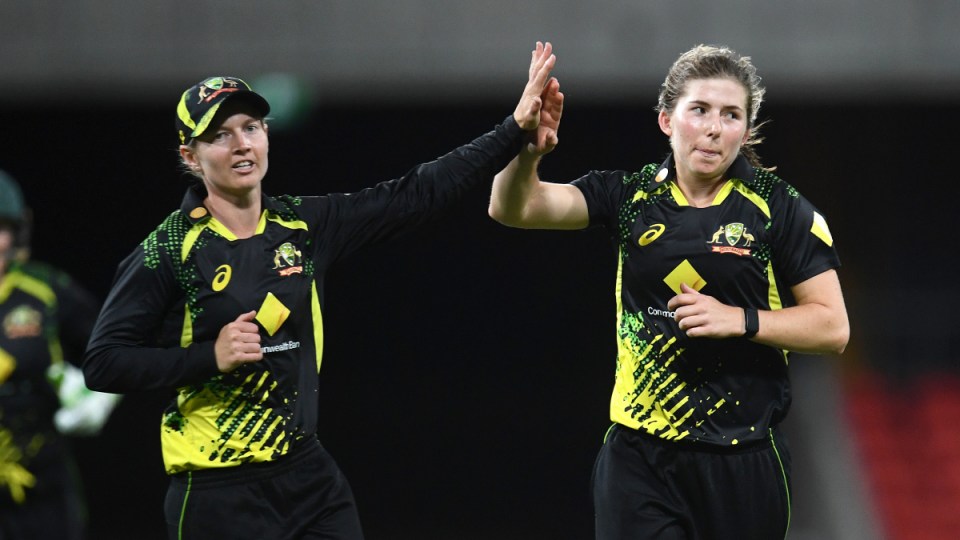 An ACL injury to Georgia Wareham (right) is a big blow to Australia before the Ashes and World Cup. Photo: AAP

Australia is set to be without first-choice leg-spinner Georgia Wareham for the women’s Ashes and one-day World Cup after she suffered a serious knee injury.

Wareham was hurt while fielding for Melbourne Renegades in Wednesday night’s WBBL loss to Adelaide, going down as she ran across the boundary.

Scans have confirmed a ruptured anterior cruciate ligament in the 22-year-old’s left knee.

The news is a serious blow to Australia ahead of the Ashes, given Wareham is the first-choice wrist spinner and one of the world’s best leggies.

Not what we want to see in Hobart 😬@RenegadesWBBL leg-spinner Georgia Wareham comes off the field after suffering what looked like a nasty knee injury. Fingers crossed Georgia is ok! #WBBL07 pic.twitter.com/kmmOFYPVB6

Cricket Australia is yet to put a time frame on Wareham’s return, however given the usual six-month recovery she seems unlikely to be back for the one-day World Cup in New Zealand in March.

“She had an ACL rupture on the same knee at the age of 14 whilst playing (Aussie Rules) which was reconstructed using a synthetic (LARS) ligament,” Australia’s team doctor Pip Inge said.

“Whilst in the field yesterday she had an instability episode of the left knee resulting in a rupture of the graft.

“As a result she will be unavailable for the remainder of the WBBL season.

“Cricket Australia and Cricket Victoria medical staff are working in consultation with Georgia on the longer-term management plan.”

Beyond the 50-over World Cup, Australia also have the Commonwealth Games tournament next August.

Wareham has been one of Australia’s best since debuting in 2018, never relinquishing her spot.

In T20 cricket she averages 13.52 with the ball and goes at less than six an over, while in one-day cricket her economy rate is at a lowly 4.24.

She had also started the WBBL with 3-13 for the Renegades against Hobart last weekend, as many wickets as she took in an injury-ruined tournament last year.

Australia coach Matthew Mott has a wealth of depth with finger spinners, with Jess Jonassen still to return after missing the India series.

The leading wicket-taker in the history of the WBBL Molly Strano has also been unable to regularly break into the side in recent years.

But Wareham has been his only real wrist-spinner in recent years.

Amanda-Jade Wellington will likely be Australia’s next option if selectors want the variety of a leg-spinner in their squads, after she played in the 2017-18 Ashes but was dropped shortly after.

Wellington is also the only other leg-spinner to feature in Australia A matches in recent years, averaging 11.20 in T20s for the national side and 31.80 in ODIs.