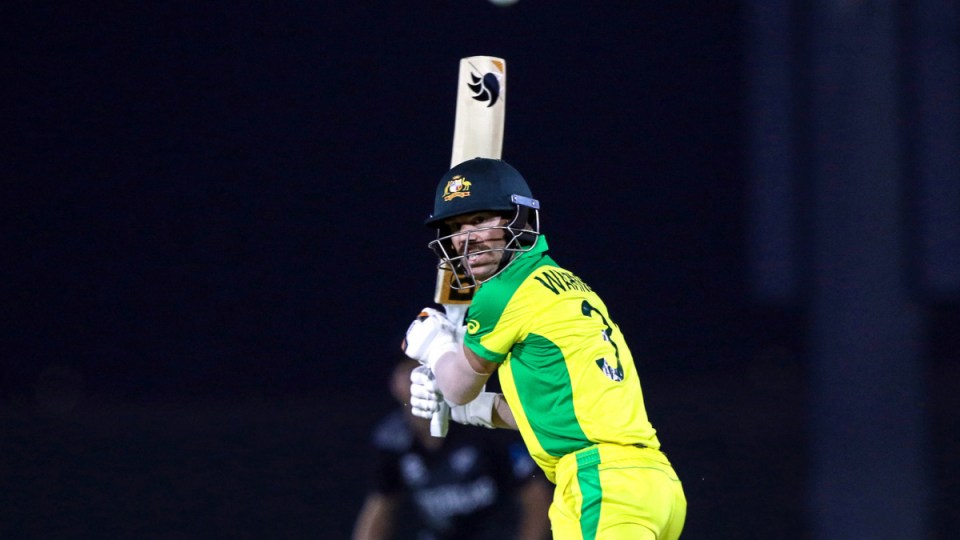 Warner was out off the first ball of the innings in an ominous start to Australia’s run chase, after New Zealand posted a competitive 7-158.

But after Ashton Agar (23) was dismissed with Australia needing eight runs to win off three balls, Josh Inglis coolly stepped up to thrash Kyle Jamieson for consecutive fours and ice a morale-boosting win with a delivery to spare.

There will still be concern for Warner before Australia’s opening World Cup clash against South Africa on Saturday night (AEDT).

He has had little time at the crease since being dumped as captain of Indian Premier League outfit Sunrisers Hyderabad and then left out of the team completely after two failures when the tournament resumed last month.

Warner lasted just one ball against the Black Caps, sensationally caught in the slips by a diving Martin Guptill off the bowling of Tim Southee.

Glenn Maxwell, who was rested from the clash and is unsure if he will face India on Wednesday (AEDT) in the side’s second and final tune-up, cautioned against reading too much into Warner’s recent form.

“If you ever doubt Davey it’s an absolute no-no. You know he will turn it around. He’s a superstar in all three formats,” Maxwell said.

“He’s made so many runs, he will go down as one of the greats.”

Captain Aaron Finch hit 24 off 19 balls, while Mitch Marsh thrashed 24 off 15 to lead a recovery, before Smith and Stoinis shared a 48-run fourth-wicket stand.

Mitchell Santner (3-22) took two wickets in an over, combining with Trent Boult (2-13) to spark Australia’s mini-collapse.

Agar and Mitchell Starc (13 not out) hit back to leave the Australians needing 13 runs to win off the final over.

Australia has fallen from top spot to seventh in the T20 rankings after just six wins from its past 21 games.

Leg-spinner Adam Zampa (2-17) and quick Kane Richardson (3-24) did their best to restrict New Zealand after Australia won the toss and bowled.

Richardson provided coach Justin Langer food for thought before Australia’s tournament opener by claiming the last three New Zealand scalps, including two in the final over.