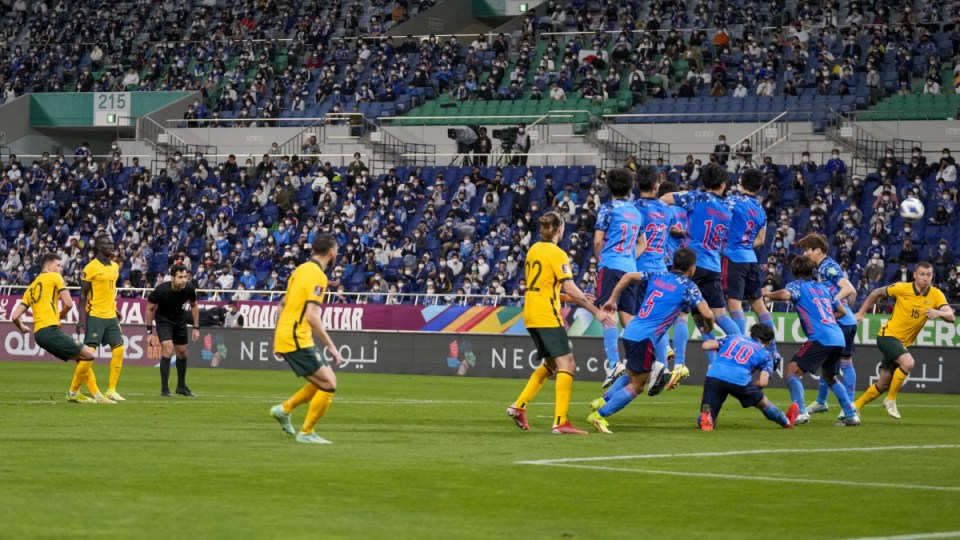 Ajdin Hrustic beats the wall with his free kick to score Australia's goal in the 2-1 loss to Japan. Photo: AP

The Socceroos’ record 11-game World Cup qualifying run is over, with an Aziz Behich own goal securing Japan a 2-1 win at Saitama on Tuesday night.

A thunderbolt of a freekick from Adjin Hrustic in the 69th minute had drawn Australia level after Japan scored early through Ao Tanaka, but Behich was helpless to stop the ball deflecting off his leg after Mat Ryan palmed a shot onto the frame of the goal in 85th minute.

The loss is Australia’s first on the road to Qatar 2022 and extends their wait for a win over the Asian powerhouse having last defeated Japan in 2009.

The loss takes Japan into third, three points behind an Australian side that still occupies one of the two automatic qualifying places.

FULL TIME | Not our night in the end.

Behich’s misfortune compounded a bad night for the Australian left back, who was at fault for Japan’s eighth-minute opener when he missed a clearance and Tanaka pounced to score his first goal for his country.

That was a perfect start for the hosts, who came into the match under huge pressure after losing two of their first three fixtures.

The lead meant Japan could settle into a rhythm of patiently waiting before pouncing on any Australian mistake and launching into a counter-attack.

That tactic should have brought a second goal for the hosts in the 35th minute when Yuya Osako was set free after Hrustic lost possession in midfield but the Japan forward skewed his shot wide.

🇯🇵 Hajime Moriyasu insisted nothing less than victory was good enough for the Samurai Blue. His charges were made to work for it, but a late winner jumps them 3 points behind the @Socceroos in Group B 📈#WCQ | #AsianQualifiers | @jfa_en pic.twitter.com/7416kjLq06

Australia then almost forced an equaliser out of nowhere six minutes later.

Tom Rogic released Adam Taggart inside the penalty area but the Australian striker’s powerful drive was deflected onto the post by Shuichi Gonda and Aaron Mooy – making his first start for the Socceroos since November 2019 – was unable to beat the scrambling Japanese defence with his follow-up effort.

Mooy gave Japan an early warning in the second half when he flashed a shot wide of the goal but it was Hrustic who stepped up to put the Socceroos’ level after a dramatic sequence.

Ajdin Hrustic with a brilliant free-kick to bring us level!

The German-based attacking midfielder was caught on the edge of the box by Hidemasa Morita as he ran onto a Martin Boyle cutback.

The referee initially awarded a penalty to Australia but as Boyle waited to take the spot kick, VAR ruled the offence had happened outside the box.

In mattered not though as Hrustic slammed his shot home to score his second goal for the Socceroos.

Japan responded and forced Ryan into several key saves, before finding a way to win in the dying minutes to break Australia’s hearts once more.

The Socceroos’ next match is a crucial game against fellow Group B heavyweights Saudi Arabia on November 11 which Australia are hopeful of hosting in Sydney for just their second game on home soil in this qualifying campaign.