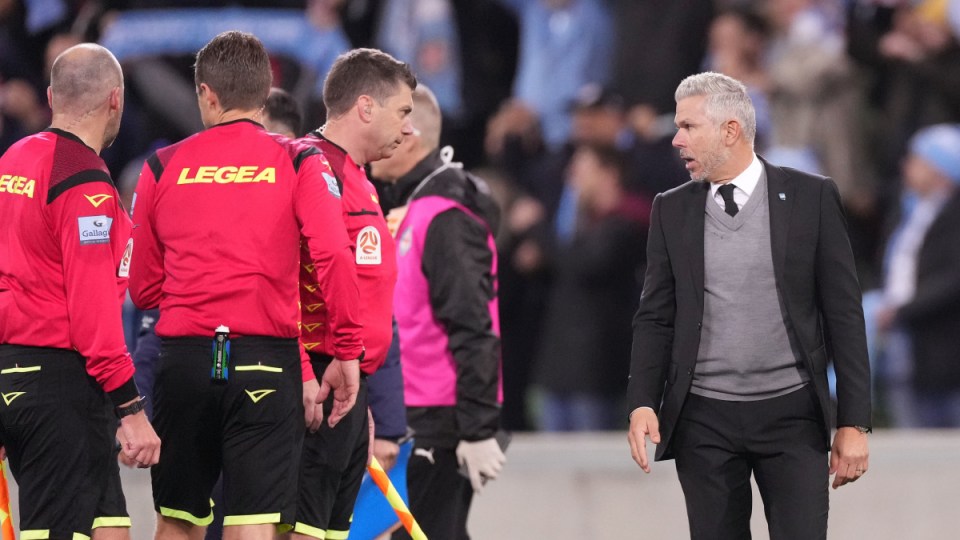 Football Australia says refs have been contracted to officiate in the FFA Cup with contracts still to be sorted. Photo: AAP

Football Australia has avoided a refereeing crisis by contracting officials for upcoming FFA Cup and pre-season matches, but is yet to finalise a full-time arrangement for the upcoming A-League seasons.

The Professional Football Referees Association (PFRA) released a statement on Tuesday saying it had informed FA on Monday its referees would not officiate FFA Cup and A-League Men and Women pre-season games after “more than three months of discussions and efforts to resolve several topics”.

The PFRA said referees were without contracts for the upcoming season and added the A-Leagues leadership and coaching department did not have their contracts renewed when the leagues unbundled from the FA in July.

They said this meant referees had been given “no direction, coaching/instruction and no fitness coaching” over the past three months.

“We are now just weeks out from the start of the season, and the referees find themselves in a position without any form of coaching and/or preparation,” their statement said.

The PFRA also took issue with the announcement of the A-Leagues refereeing panels, saying “members were unfairly removed from their position without any due process or warning”.

“The PFRA A-Leagues referees sacrifice an enormous amount for football in the country and it seems staggering that we find ourselves in a position without basic items such as leadership, coaching staff, fair processes for changes to panels, and a standard contract,” PFRA president Paul Cetrangolo said in a statement.

“The PFRA remains committed to solving these issues but will not officiate further matches while these items remain outstanding.”

The PRFA’s call could have had an immediate impact as Adelaide Olympic FC are due to host Adelaide United in the FFA Cup this Sunday, with more games to come next week.

But in a statement on Tuesday night, FA made it clear those games would go ahead.

The governing body said it had confirmed a new structure for referees – which was part of its new governance model – and had on Tuesday advertised for several new positions, including a head of refereeing.

“Football Australia can confirm that it is also holding discussions around contractual terms with A-League referees,” the statement said.

“The FFA Cup and A-League trial matches will go ahead as scheduled and referees have and will be appointed for these matches.”

The A-League Men season kicks off on November 19 with the women’s competition commencing on December 3.