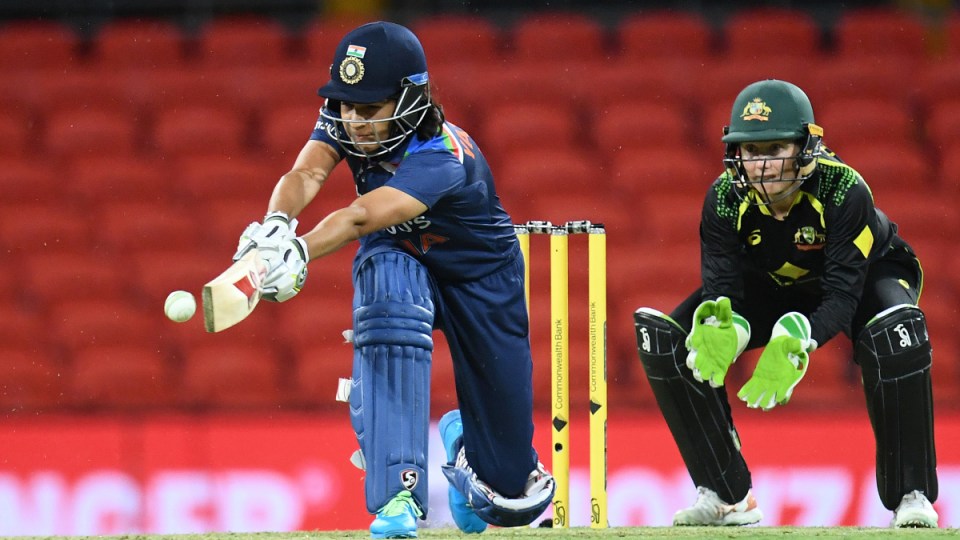 Rain has washed out the opening women's T20 match between Australia and India on the Gold Coast. Photo: AAP

Australia’s multi-format series against India remains up for grabs after Thursday’s first Twenty20 international was wrecked by rain.

Asked to bat first at Metricon Stadium by Australia captain Meg Lanning, who won her fifth-straight toss of the series, India was 4-131 in the 16th over when rain forced players from the field.

The no result means Australia now leads the series 7-5 and can take an unassailable lead if it wins Saturday’s second T20I.

“It’s obviously a very tight series … they are a very, very good cricket side and you can see how much they’ve improved even in the last 12 months since that World Cup.

“They’ve got some very aggressive batters who can take the game away from you, so we’re definitely going to have to have a really good look at their players and hopefully come out on Saturday ready to go.”

Jemimah Rodrigues, making her first appearance of the series, was unbeaten on 49 off 36 deliveries, with Richa Ghosh also not out on 17.

“We’re very confident … especially as the last two ODIs went so close and the Test match where you know we fought back so well,” Rodrigues said.

“That obviously gives us a lot of momentum.

“We spoke in the dressing room, we want to continue the same momentum.

“We have a very young side, a lot of energy in this side. Everyone’s fearless, so we just want to play a fearless brand of cricket.”

Unsure how to describe this shot, but it's a six for Shafali Verma from her first ball 😅 #AUSvIND pic.twitter.com/PntrFphsVf

Lanning used all eight of her bowling options, including debutantes Tahlia McGrath and Hannah Darlington.

Ashleigh Gardner was the pick of the bowlers with 2-28 off three overs, having removed both openers in her first over.

India made a quick start, with Shafali Verma (18 off 14), hitting three sixes in her whirlwind knock while Test century-maker Smiriti Mandhana scored two fours and a six in her 17 off 10 deliveries.

Both fell to Gardner in the fourth over and when captain Harmanpreet Kaur (12 off 5) was trapped lbw by Sophie Molineux (1-23), India was wobbling at 3-55.

Rodrigues and debutante Yastika Bhatia (15 off 15) combined for a 51-run, fourth-wicket stand to steady the Indian innings but just as they prepared to build a solid platform the rain started.

Leg-spinner Georgia Wareham (1-3) was the other wicket-taker for Australia with the washout coming after last week’s drawn day-night Test was also heavily affected by the weather.

The series wraps up this weekend with the last two T20Is at Metricon Stadium on Saturday and Sunday.