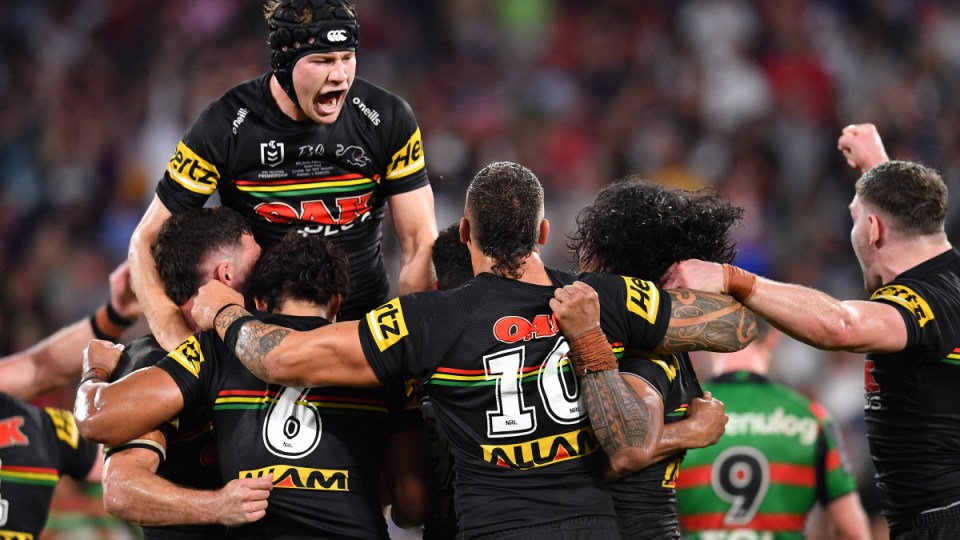 They say adversity brings out the best, and the NRL competition just completed has left fans exhilarated and exhausted after one of the most rancorous, controversial and, in the end, glorious seasons on record.

Rugby league, the seemingly unkillable cockroach of Australian sport, delivered its usual measure of sublime skill, car-crash physicality and high drama despite COVID dislocation and a slew of well-intentioned but over-zealously enforced rule changes that for much of the season bewildered and enraged players, coaches and fans.

‘‘Short-term pain for long-term gain,’’ insisted Peter V’landys, chairman of the Australian Rugby League Commission and the driving force behind the rules.

In the 2021 season, declared NRL head of football Graham Annesley, the referee would punish any defender standing offside or trying to slow the play by grappling in tackles and otherwise preventing an attacker from quickly playing the ball.

Referees early on overplayed their hand, penalising even the most innocuous infractions.

While the better-coached, fitter teams adjusted and thrived, those unprepared or not fit enough floundered. Score blowouts, thrashings by 60, 50 and 40 points, began in round one and continued all year.

The V’landys revolution didn’t stop there.

In typical crash-through-or-crash style, the chairman announced, only days before Magic Round, the May 12-14 showpiece in which all 16 teams played at Brisbane’s Suncorp Stadium, that there would be a refereeing crackdown on concussion-inducing high tackles.

Any player connecting with an opponent’s head – be it a brain-rattling stiff-arm to the skull, a harmless graze or brush, or an unavoidable accident – would pay the price. It was carnage.

Fourteen players were sin-binned for 10 minutes and three were sent off permanently.

Grumbled Canberra Raiders coach Ricky Stuart: ‘‘Jesus, we’ve got a game that’s unique, but it’s not a game for everyone – it’s a tough, brutal contact sport. If we want to take that away, let us know [and] I’ll start recruiting different types of players’’.

Happily, in the remaining months of the competition, coaches and players buckled to the revolution, the referees relaxed, and the game rediscovered its mojo.

As V’landys intended, rugby league did become even faster with fewer stoppages, and the number of head-high tackles fell markedly.

Elite teams with skilful, lighter, faster, fitter players became even more dominant. And the big hard men in the middle continued to tackle each other like runaway trains, but legally now.

Then, in July, the new Delta strain of COVID kicked in, and lockdowns descended on rugby league’s heartlands.

As they had done during the first COVID outbreak, in 2020, V’landys and his deputy Andrew Abdo saved the day.

The competition, which has teams from Sydney, Newcastle, Auckland, Melbourne and Canberra, was relocated to Queensland, with the players living in isolation and the matches played in Brisbane, on the Gold Coast and Sunshine Coast, in Townsville and regional centres.

For the first time, the grand final was played outside Sydney.

Yet somehow, at season’s end the game found itself in excellent shape, with enormous interest generated by a series of tight and titanic matches when the top teams faced off in the finals series.

This brand of rugby league – spectacular, fierce but clean contests with the result in doubt until the final hooter – proved that V’landys prediction of short-term pain for long-term gain was on the money.

Supporters wore their club’s merchandise with pride, TV ratings soared and sponsors returned to the fold.

They were led by the game’s best halfback, Nathan Cleary, son of coach Ivan, whose passing and kicking in general play was pinpoint-accurate despite torn shoulder tendons that required an operation after the grand final.

Russell Crowe’s South Sydney, paced to perfection by 71-year-old, seven-time premiership coach Wayne Bennett, utilised a lethal sweeping left-side attack in which each player in turn beat his opposite and made room for the man outside him, culminating in left winger Alex Johnston touching down.

Johnston, who scored such a try in the grand final, was the season’s top try scorer: 30 from 21 matches.

After season 2021, the players and those who run the game could be forgiven for taking a deep breath, sitting back and watching the Ashes. As if.

Pre-season training begins on November 1, and throughout the off-season now upon us, V’landys and his cohorts have undertaken to fine-tune some of the more problematical rule changes; an admission, perhaps, that they introduced too many, too soon.

There will be no relaxation of the ban on head-high tackles: Blows to the head have no place in the modern game.

The suburban tribalism which has driven rugby league since its inception in 1907 will be back in force.

New Queensland coach Billy Slater will be plotting the downfall of New South Wales in State of Origin.

International matches will again be played.

A new Brisbane-based team will be recruiting to enter the competition in 2023.

The good, the bad and the ugly. That’s rugby league. Those who love it wouldn’t have it any other way.

Larry Writer is a Sydney-based author who has written widely on rugby league, including the classic Never Before, Never Again, the story of St George’s unbroken premiership run from 1956-66.