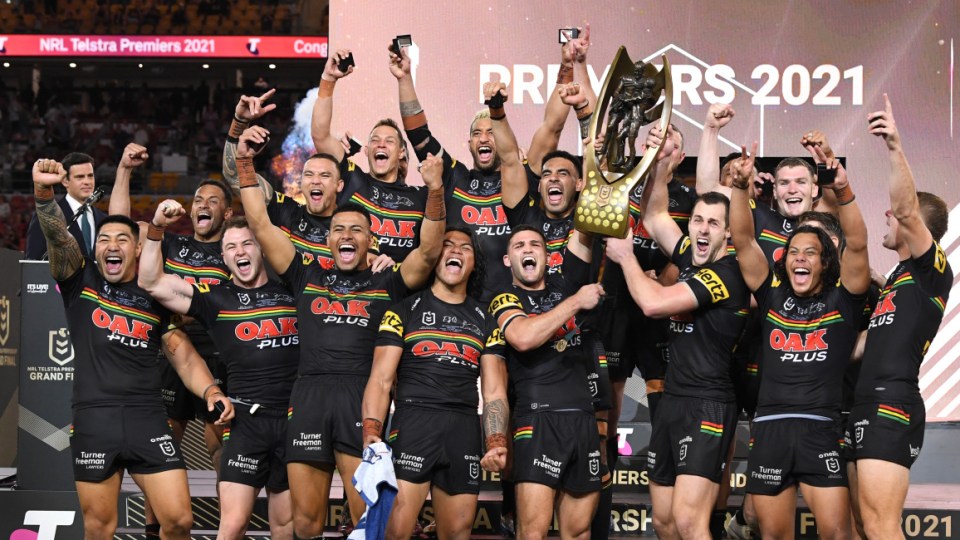 The triumphant Panthers celebrate their win at Suncorp Stadium in Brisbane on Sunday night. Photo: AAP

The Panthers dominated territory but were left scampering in the final minutes of Sunday’s grand final at Suncorp Stadium to ensure Souths didn’t steal a win in captain Adam Reynolds and coach Wayne Bennett’s final game for the club.

An intercept try by Stephen Crichton, converted by Nathan Cleary, proved the difference in the match watched by a fervent crowd of 39,322 reduced to 75 per cent capacity due to a COVID-19 outbreak in the Queensland capital.

Crichton intercepted a long cutout pass from Cody Walker and ran unopposed 40 metres to the line.

The simple conversion by Cleary gave the Panthers a six-point advantage that its opposition could not bridge.

“It feels like a dream,” Cleary said of the triumph that gave the Panthers their third premiership after previous success in 1991 and 2003.

Cleary, who was awarded the Clive Churchill Medal, said “it’s special’’ to achieve the feat with his father Ivan coaching the side, but also reflected on 13 of the club’s 17 players coming through the academy system.

“We are not just playing for us, but it is for the whole community. Alongside my brothers, we have grown up together. We are like a big family. What an achievement for this group that have come through together.”

The older Cleary said so many players had been under a cloud.

“I can’t sum up my emotions. This year has been totally different. It’s a two-year thing, three-year thing really,” coach Cleary said.

“There was at least five who shouldn’t have been playing today. It was a calculated risk on a lot of boys.

“I woke up at 2am this morning and couldn’t get back to sleep. Thinking three or four of them could have been gone by 10 minutes.

“It’s purely on courage these boys have won.”

Incredible scenes as the Penrith Panthers win the 2021 Premiership.

The loss was particularly harsh on departing Rabbitohs co-captain Adam Reynolds, who narrowly missed a sideline conversion to level the scores, then watched his two-point field goal in the 79th minute fall short.

The highest points scorer in Souths history is heading to Brisbane for the 2022 season.

The Panthers dominated territory throughout, but were left scampering in the final minutes to ensure Souths didn’t steal a win in Reynolds’ and coach Wayne Bennett’s final game for the club.

Souths had been tackled just once inside Penrith’s 20-metre zone but were hanging on, with the scores locked at 8-8 with 13 minutes to play as Penrith squandered chances before Crichton pounced on his opportunity.

Undeterred, Walker set up Alex Johnston’s 30th try of the season to get the Rabbitohs within two points, and Reynolds’ sideline conversion attempt flew just outside the right post.

In an effort to snatch an unlikely victory, Walker then threw a pass over the sideline with just over two minutes to go as a possible Johnston try went begging, before Reynolds’ field goal attempt fell well short of the uprights.

It was only Bennett’s second loss in his 10th grand final as a coach, his appearances now stretching across five decades with four different clubs.

Bennett’s counterpart Cleary, in his 370th game as a coach, meant he became the only man to win one for the first time after their 250th game.

Penrith dominated Souths in the first half, making 1070 metres to Souths’ 632.

They averaged almost 20 metres per set more than Bennett’s side, despite the Rabbitohs making 29 tackle breaks to 15.

PANTHERS SWITCH IT ON 🔥

Matt Burton managed one of those Penrith tackle breaks, slicing through when the Panthers ran it on the last tackle, breaking the deadlock after 16 minutes of peppering the line.

Walker’s brilliant individual try was the reply, the Souths five-eighth fending off Cleary as he beat four men to keep his side in the game.

But Penrith kept coming, controlling the ruck to exhaust Souths as halftime approached.

A Cleary penalty goal was their only reward though, giving Penrith an 8-6 lead at halftime.

A Souths penalty early in the second half levelled the scores, before the thrilling conclusion ended in the Panthers enjoying the spoils of victory.