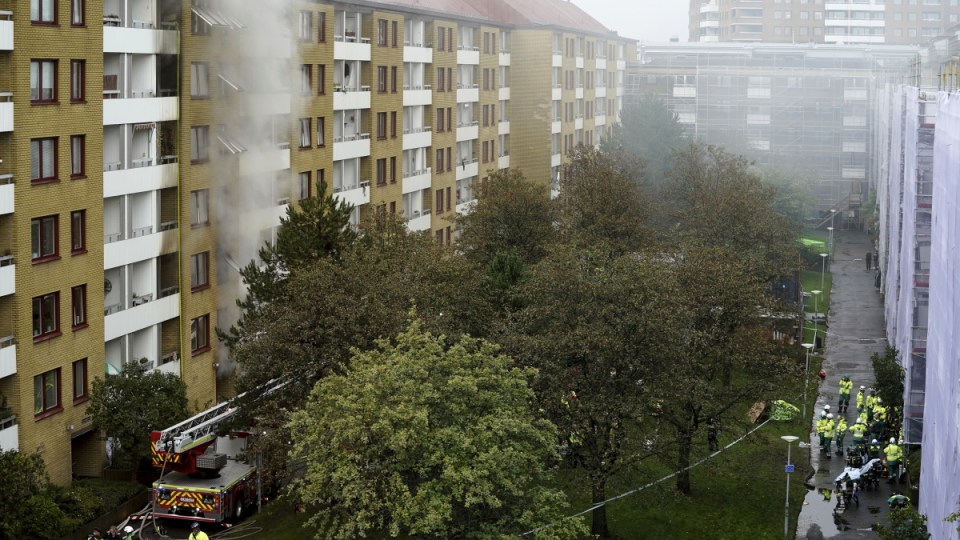 An explosion and fire at an apartment building in Sweden injured 16 people, four of them seriously. Photo: EPA

Swedish police say they are seeking a man in connection with an explosion and fire at a large apartment building this week that injured 16 people, four of them seriously.

The man is wanted on suspicion of public destruction and has not been located yet, police said.

Authorities did not identify him but Swedish media reported that the suspect was a man in his 50s who had lived with his mother in the building in Gothenburg, Sweden’s second-largest city.

“We still do not know what caused the explosion,” senior police officer Anders Borjesson said at a press conference.

“The investigation is far from over, we still have a lot ahead of us.”

Borjesson said that the warmth and the lack of oxygen inside the building had made it difficult for the investigators to do their work.

He declined to give details on the suspect.

The property owner had been trying to evict the man and his mother from their apartment, according to daily newspaper Aftonbladet.

The local Goteborg-Posten newspaper said an eviction was planned for Tuesday, the day the explosion occurred.

Aftonbladet said police had charged the man with several alleged crimes a week before the blast.

The paper also reported that after he was was not allowed to see his mother at a nursing home due to pandemic restrictions, the suspect harassed several people including the owner of the building.

The explosion rocked the building in central Gothenburg early on Tuesday.

Ensuing blazes spread to several apartments and hundreds of residents were relocated.

At least 140 apartments were damaged.

Swedish media had quickly had focused on the possibility that the explosion could be related to feuding gangs.

Sweden has had a rise in violence between organised criminal gangs.

Police and prosecutors said on Thursday that “at present, there is no indication that the blast has links to gang crime”.