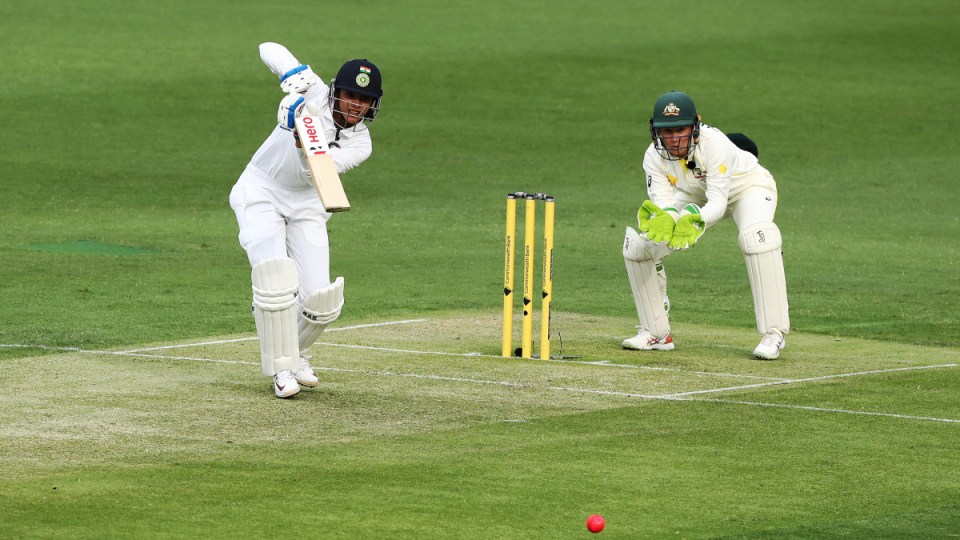 An unbeaten half-century from Smriti Mandhana ensured India made a bright start against Australia. Photo: AAP

An unbeaten half-century by Indian opener Smriti Mandhana has led the tourists to a dominant 1-132 after a rain-marred opening day of the women’s Test against Australia on the Gold Coast.

Mandhana scored a career-best 80 not out before the final session of the day was washed out by persistent showers at Metricon Stadium on Thursday night.

The 25-year-old shared a 93-run opening stand with Shafali Verma (31) after Australia captain Meg Lanning won the toss and sent the tourists in, in the first women’s Test between the two nations since 2006.

No.3 Puman Raut is unbeaten on 16 and has provided good support for Mandhana in a 39-run partnership.

Verma was the only batter dismissed on the day, falling to a comfortable catch by Tahlia McGrath from left-arm spinner Sophie Molineux (1-18) just before the end of the opening session.

Earlier, Verma had been given three lives by the Australian fielders, twice eluding the grasp of Lanning at first slip and then dropped at mid-on by debutante Annabel Sutherland when on 25.

Sutherland, who showed plenty of emotion when presented her cap by star all-rounder Ellyse Perry earlier in the day, managed to get in one over between the rain delays – a maiden.

Fellow first-gamer Darcie Brown had a nervous start with the ball, conceding 0-28 off four overs including 16 runs to a rampant Mandhana in one over.

Georgia Wareham and Stella Campbell had little chance to make an impact in their first day of Test cricket for Australia.

India has selected two rookies for the match in Yastika Bhatia and Meghna Singh, with the Test the fourth contest of the multi-format series.

Australia holds a 4-2 points lead after winning two of the three one-day internationals with four points on offer for the winner of the sole Test before three T20Is.

India on top against Australia as rain mars pink-ball Test