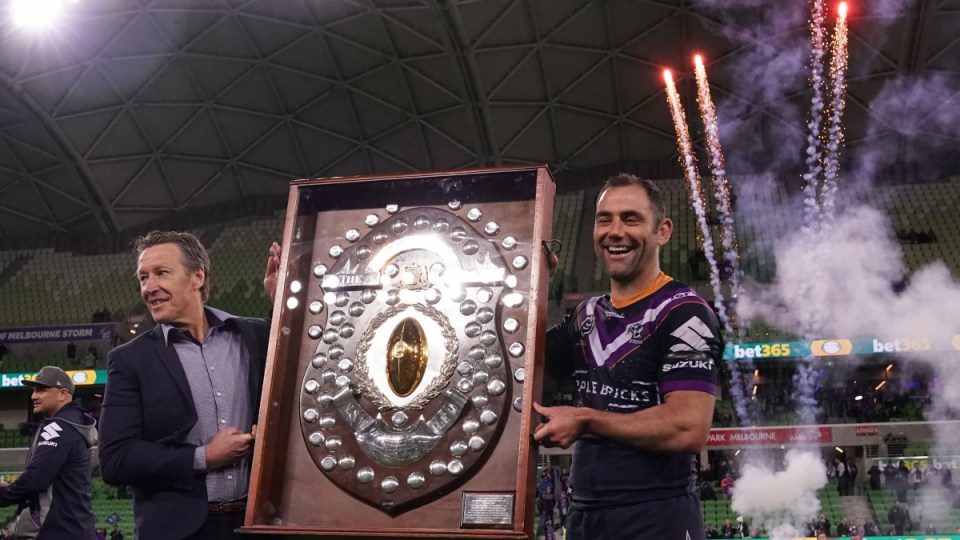 Cameron Smith is furious with his former Storm teammates for bringing the club into disrepute. Photo: AAP

The long-time club leader lashed the players, as well as Storm forward Chris Lewis, who were hauled in front of the unit on Tuesday while the club conducts its investigation.

The NRL is expected to suspend the players for at least two games and hand down fines of up to $40,000.

Two undated videos surfaced online early this week which appeared to show Munster, Smith and several other people in a room with a white substance on a table.

A second video shows Munster dancing on the same table.

"The actions of three of our players has put our club in the headlines for all the wrong reasons."

A letter from our CEO.

Lewis, who made his NRL debut last year as a 28-year-old, isn’t in the vision but is part of the probe.

Smith described the actions of the players, as “dumb” and said they had made a poor choice.

“These boys know the rules; it’s illegal in society and within the game of rugby league,” Smith told SEN radio.

“I’d like to think they’re smarter than the way they’ve acted.

“To allow outsiders into a room and they’ve got phones out filming … it’s mind-boggling to see these guys make these poor choices.”

He said Munster and Smith were Storm leaders and he was extremely disappointed by the way they had treated the club.

“They’ve put so much heat and spotlight on the Melbourne Storm as an organisation and the same on their teammates and former players … who for their entire career did the right thing,” the former Kangaroos captain said.

“It’s taken a long time for people to build the club and have it held in such high regard across all sports and you’ve got guys wanting to make dumb choices and they can bring it all down in an instant.

“That’s what annoys me.”

“As a club we’re bitterly disappointed with the incident,” said Ponissi.

“It’s certainly against everything that we stand for as a club, the standards that we set.”

Ponissi, who joined Melbourne in late 2007, said the behaviour wasn’t indicative of a culture problem at the NRL powerhouse.

“Any time there’s an incident it’s a problem but it’s not widespread,” Ponissi said.

“It’s probably how you react – any great cultures will face moments of adversity and challenging times … but it’s how the people in the club react and we will react in the most positive way possible.”

Storm issued a letter to its members on Wednesday saying the players were remorseful for their actions.

“Having spent a lot of time with the players involved over the last few days, I know they are extremely remorseful and embarrassed,” Melbourne boss Justin Rodski wrote.

“We expect to be in a position to provide an update to our members early next week.

“The three players involved will also be present to address this issue directly once the investigation has concluded.”