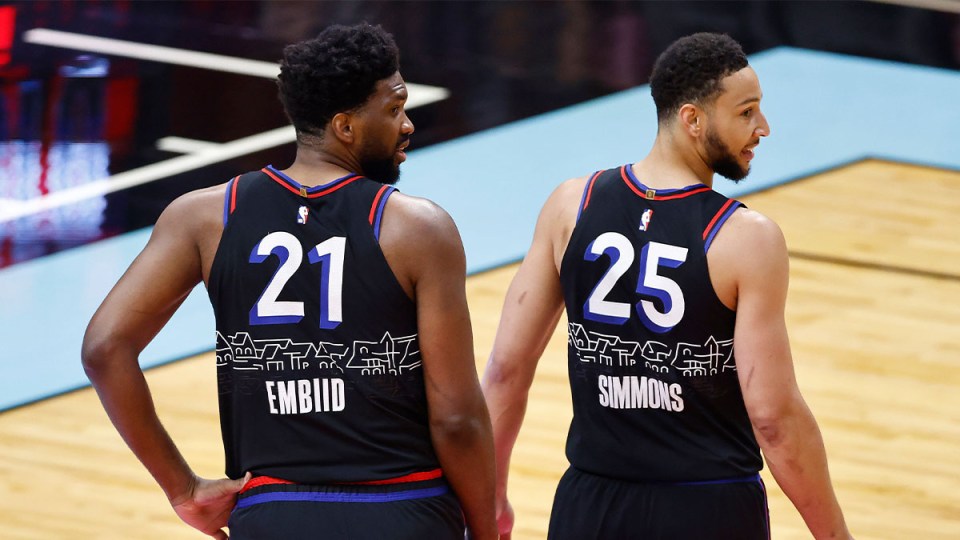 Meanwhile the team brass still have “lots of hope” about bringing back their unhappy point guard.

Australian Simmons reportedly informed the team last month that he wanted to be traded and would not report to training camp, which starts on Tuesday.

The Sixers and Simmons appeared headed for a sour parting after coach Doc Rivers and Embiid blamed Simmons for the team’s playoffs elimination in June.

On Monday, Embiid confirmed he and other 76ers players had attempted to visit Simmons in Los Angeles, but had been rebuffed.

“Honestly, I’m disappointed,” Embiid said, when asked what he would say to Simmons.

“In the regular season, we’ve been so good and so dominant that we know it’s working. It’s about taking the next step and everyone playing up to their potential. To [be] able to win is hard.”

Embiid addressed the criticism of Simmons following their game seven loss to the Atlanta Hawks in the Eastern Conference semifinals.

“I don’t have any regrets because I didn’t call out anybody,” he said.

“I just stated the facts. I’m honest and I can’t lie. I don’t feel like I put anybody in a bad situation where they had to feel bad.”

Simmons’ inability – or unwillingness – to take shots proved costly during the series with the Hawks.

He also drew criticism for his performance at the foul line, where he made just 34.2 percent of his attempts (25-of-73) in 12 playoff games, after shooting 61.3 percent during the regular season.

Coach Rivers and general manager Daryl Morey have both expressed hope for reconciliation.

Morey said he had spoken with Simmons nearly seven weeks ago.

“We have a lot of optimism we can make it work,” Morey said.

The team’s coach echoed this sentiment.

“Clearly not an easy situation but it’s easy individually. We’re going to focus on who’s here with hopes that we do have Ben at some point,” Rivers said.

“Ben didn’t say that. I can’t say he said that. That’s just an assumption.”