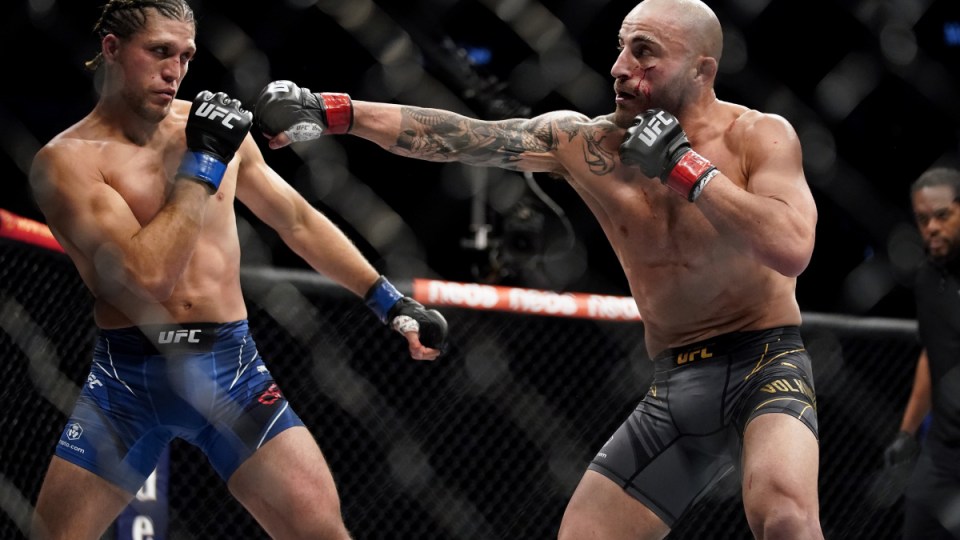 If Alex Volkanovski needed a new nickname he could claim The Terminator with the Australian proving unstoppable in his UFC world title defence in Las Vegas.

Volkanovski won a bloody battle against American Brian Ortega to retain his featherweight title with a unanimous points decision, 49-46, 50-45 and 50-44.

It was his 20th consecutive win, including 10 straight in the UFC.

“All you doubters, I’m going to keep proving you wrong time and time again,” Volkanovski said to the packed stadium.

“It’s about time for respect.”

Volkanovski narrowly took the points in the opening two rounds before the fight escalated in the third, which many rated one of the best rounds of the year.

The Australian managed to escape two submissions, with jiu jitsu black belt Ortega trapping the champion in a mounted guillotine and then a triangle choke.

Volkanovski then pounced on his opponent, pummelling Ortega who was left a bloody mess.

Ortega was checked by the fight doctor at the end of the third but allowed to continue.

Despite battling COVID-19 in March, Volkanovski didn’t appear to tire and kept moving forward on his opponent throughout.

He survived another guillotine in the fourth round, giving the referee the thumbs up, and continued to dominate as a courageous Ortega somehow lasted the five-round war of attrition.

“I thought it was done,” Ortega said of the third round.

“I was trying to go for his head, but that little bastard is as tough as hell.

“I wrapped on to that neck and tried to squeeze it; I tried to finish him and heard him gargling, but he slipped out.

“He’s the champ for a reason.”

Although he slammed Ortega in the fight lead-up, calling the contender a “drug cheat” and undeserving of the belt, Volkanovski said the Californian had proven him wrong.

“Man, he’s good – obviously I’m going say he was not on my level, trying to get in his head as much as I could,” Volkanovski said.

“I thought I was in his head and then he came back even stronger, so credit to him.

“I feel like an idiot saying some of the things I did because he proved himself.”