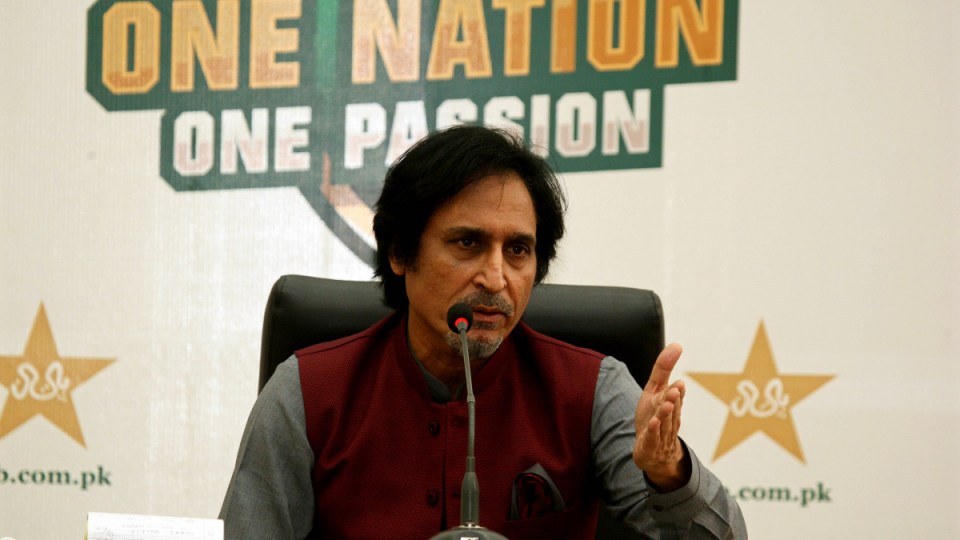 Ramiz Raja has accused the "western bloc" of not looking after the rest of the cricket fraternity. Photo: EPA

Australia, England and New Zealand have been accused of acting as a bloc by furious Pakistan Cricket Board chairman Ramiz Raja, who says the sport’s fraternity is not taking care of each other.

England has abandoned men’s and women’s tours of Pakistan in October.

The England and Wales Cricket Board (ECB) acted swiftly after New Zealand’s men’s side, responding to an escalated security threat, fled Rawalpindi on the day its series was due to start.

Tim Paine’s team is slated to tour Pakistan after this summer’s Ashes, marking Australia’s first series in the nation since 1998, but the past week has cast fresh doubt on that trip.

PCB Chairman Ramiz Raja spoke with the foreign media a day after the England and Wales Cricket Board announced withdrawing their sides from next month’s tour of Pakistan.

The entire clip of his interaction is available here: https://t.co/jelbNxbBMZ pic.twitter.com/umhctceFMo

Cricket Australia (CA), locked in urgent talks with the ECB regarding an itinerary and biosecurity plan that both parties hope will soothe English players’ concerns about quarantine and other issues, is yet to discuss the Pakistan tour with relevant authorities.

Pakistan, having worked tirelessly to convince players and boards it is safe to tour in recent years, will be understandably worried about the prospect of CA following the lead of its English and New Zealand counterparts.

“If the cricket fraternity will not take care of each other then there’s no point,” Pakistan Cricket Board (PCB) chairman Raja said.

“England, Australia, New Zealand is all one bloc. Who can we complain to? We thought they were our own, but they haven’t accepted us as theirs … this western bloc gets united unfortunately and tries to back each other.”

Raja later added: “How I wish today that I was still a YouTuber, rather than the chairman of the cricket board, because I would have absolutely taken on New Zealand and England unabashedly.  It’s the feeling of being used and then binned – that is the feeling that I have right now.

“West Indies could be a little jittery and we know that the Australians will probably do what the New Zealanders and England have done. So there goes our domestic international calendar.”

England, which last visited Pakistan in 2005, is scheduled to tour the country in the 2022-23 season.

But Raja, who had a chat with ECB chairman Ian Whatmore, is taking nothing for granted.

“I said what is the guarantee of England coming back and playing here? … because a month before that tour you can easily quote tiredness, players being spooked again, sick of living in a bubble.”

Pakistan was forced to adopt Dubai and Abu Dhabi as ‘home’ grounds after an armed attack on Sri Lanka’s team bus, including Australian-born coach Trevor Bayliss, in 2009.

But Paine, Usman Khawaja, Shane Watson and George Bailey are among the notable cricketers to have played in Pakistan during recent years.

Australia has, apart from an Ashes tour, not played a single Test on foreign soil since returning home from a 2018 series against Pakistan that was staged in the UAE.

Cricket South Africa heavily criticised Australia for refusing to tour earlier this year, when CA pulled the pin because it was alarmed about an “unacceptable” risk posed by COVID-19.

That abandonment ended Australia’s hopes of qualifying for the world Test championship final.

The ECB’s decision on Tuesday, which reduced some multi-format players’ time away from home in coming months, has raised hopes of a near-full-strength squad making themselves available for the Ashes.

“The mental and physical wellbeing of our players and support staff remains our highest priority,” the ECB said in a statement that detailed its reasoning for abandoning the Pakistan tour.