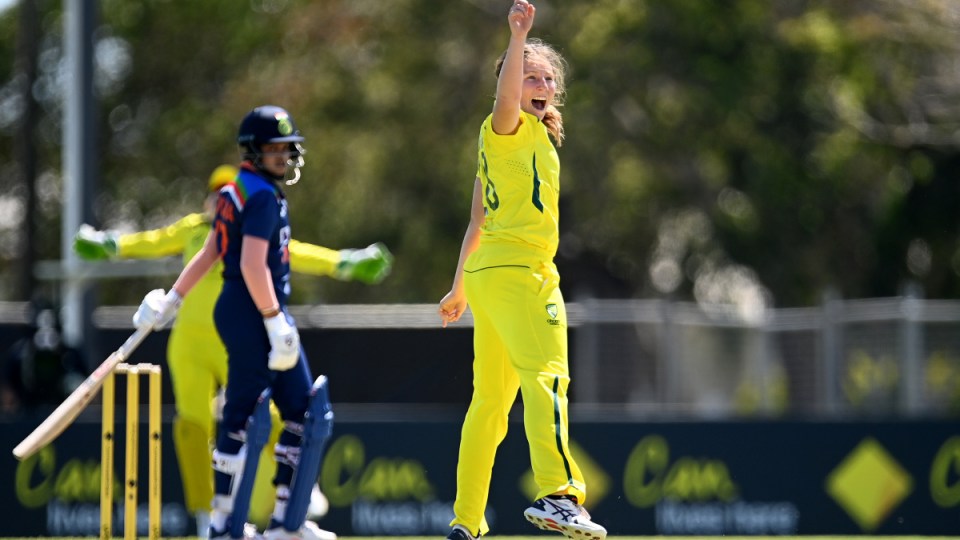 Teenage tearaway Darcie Brown’s record-breaking haul has lifted Australia to a nine-wicket victory over India in Mackay, where the hosts comfortably hauled in a target of 226 to secure its 25th consecutive ODI win.

Brown, entrusted with new-ball duties in the absence of spearhead Megan Schutt on Tuesday, snared 4-33 after Meg Lanning opted to bowl.

The 18-year-old became the youngest Australian – female or male – to capture four wickets in a one-day international, exhibiting remarkable composure while removing four of India’s top five in her first international match on home soil.

India captain Mithali Raj top scored with 61 in a total of 8-225 that proved nowhere near enough, with Australia cruising to victory in 41 overs.

The kid from Kapunda put on a show today!

What an outing from the 18-year-old quick in her second ODI #AUSvIND pic.twitter.com/u9zpil8PLm

Alyssa Healy (77) and Rachael Haynes (93no) shared a 126-run opening stand, while Lanning (53no) also enjoyed a productive stint at the crease.

Healy became the ninth Australian woman to reach 2000 career ODI runs during her run-a-ball knock, while Haynes celebrated the same milestone soon after as interest in the contest switched from the result to the veteran’s pursuit of a century.

The triumph, which extended Australia’s record winning streak in the format that dates back to 2018, was built on the back of Brown and debutante Hannah Darlington’s bowling.

Brown extended a rapid rise, having represented Australia at under-19 level at age 15 then completed her final school exams while in last year’s WBBL hub.

The South Australian prodigy and 19-year-old Darlington, the third Indigenous woman to play cricket for Australia, excelled as part of an inexperienced attack.

Ellyse Perry struggled early on, conceding 25 runs in a loose opening spell that lasted two overs, but Brown fired out openers Shafali Verma and Smriti Mandhana with the new ball.

Lanning, desperate to break a 77-run stand between Raj and Yastika Bhatia (35) that proved India’s best partnership, threw the ball to Brown after 26 overs.

Brown delivered the wicket of Bhatia with her first delivery then created a straightforward chance to dismiss Deepti Sharma in the 29th over, which Lanning put down at first slip.

Sharma was undone on nine soon after, by a Brown bouncer.

Perry finished with 0-37 from four overs, notably prompting a concussion test when she struck Raj’s helmet.

Coach Matthew Mott wasn’t alarmed by Perry’s lack of polish, arguing that a fortnight in hotel quarantine was likely to affect bowling more than batting.

“It wasn’t a complete shock we were a bit loose to start,” Mott told the Seven Network.

The multi-format series continues with another ODI in Mackay on Friday.