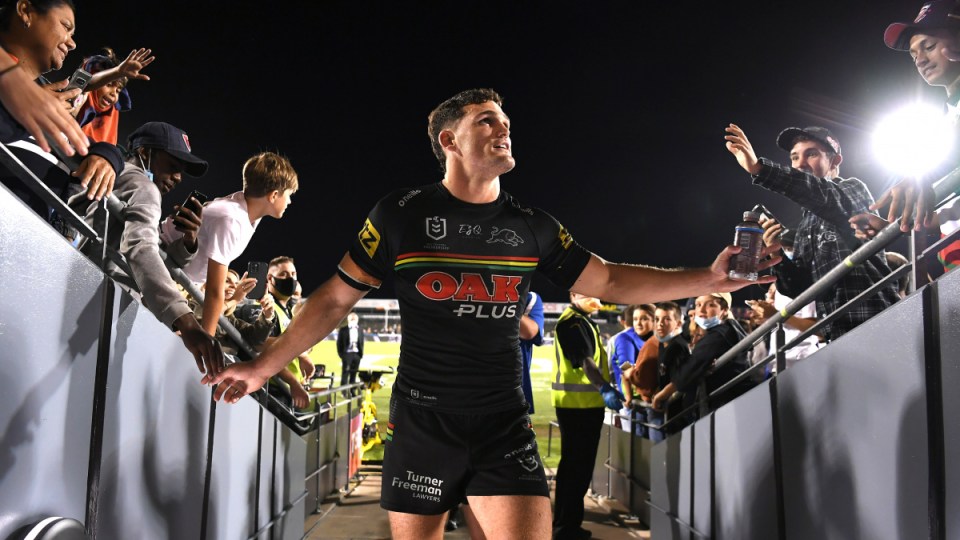 Nathan Cleary leads the race in a Dally M Medal count that is set to go down to the wire. Photo: AAP

Tom Trbojevic’s stunning end to the season could snatch him the Dally M Medal over Nathan Cleary after five players were left in the race for the NRL’s most prestigious award.

New South Wales stars Cleary and Trbojevic led the votes on 24 and 23 respectively to round 19 with Daly Cherry-Evans, James Tedesco and Cody Walker rounding out the top of the polls.

Monday night’s event was the first of two ceremonies, with the count for the final six rounds to resume and the winner announced next Monday night in Brisbane.

Penrith skipper Cleary topped the count, sitting on 21 points before voting went behind closed doors in round 12.

State of Origin duty and injury limited Cleary to one game until round 22, but three votes in a 38-12 win against Sydney Roosters in round 15 could be enough to nab him the medal in a remarkable season for the young halfback.

Cleary returned from a shoulder injury in round 22 and starred for the Panthers in his last four games of the regular season to finish unbeaten from 16 NRL games.

He was a favourite for the medal in 2020 before he was beaten by Canberra’s Jack Wighton.

Manly superstar Trbojevic was on 15 votes before the count was made confidential in round 12, but in three games to round 19 he polled eight points to finish on 23.

The 24-year-old’s dominant end to the season could nab him the game’s highest individual honour.

Trbojevic played five of the last six rounds, finishing the season with 25 tries and 27 try-assists from 16 games.

His try against North Queensland in round 25 was also given the honour of try of the year in Monday night’s ceremony.

A suspension could hurt Cody Walker’s chance of nabbing the Dally M for his history-making season with South Sydney.

The star five-eighth was deducted three points for a one-game suspension in April, leaving him on 17 points heading into next Monday night’s count ahead of Manly’s Cherry-Evans (17) and Roosters captain Tedesco (15).

Major awards will also be announced at the second event including the Dally M Team of the Year, coach, captain and rookie of the year.