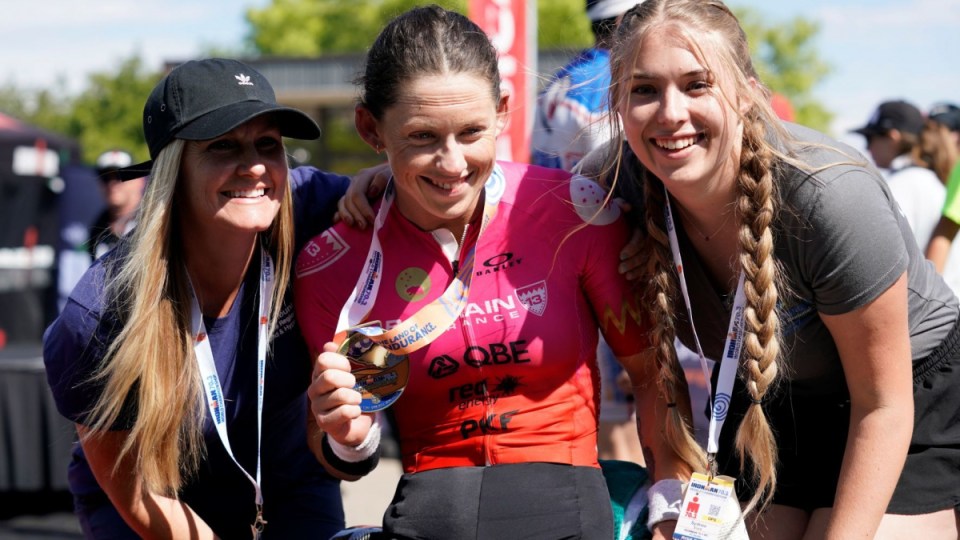 A brutal dose of sunburn hospitalised Australian paratriathlete star Lauren Parker but could not prevent her from completing the hardest race of her career at the 70.3 world championships.

Parker said the event was harder than the Hawaiian Ironman world championships, where she finished second in her age group six years ago.

The 32-year-old from Newcastle was left a paraplegic after a 2017 bike accident.

The great @_laurenparker_ finishing @IRONMANtri 70.3 World Championship in St George, this coming after her silver medal in Tokyo for paratri.
None tougher. #TeamCAF pic.twitter.com/7VrYMTINWS

Parker was preparing in the Las Vegas heat for the 70.3 worlds when she had to wait in a car after a training session.

She had her feet on the dashboard and because Parker has no feeling in that part of her body, she did not realise they were being scorched by the sun.

Parker had to spend time in a St George hospital for treatment.

The two nurses dressed her wounds after the 1.9km swim and the 90km bike.

“They were unbelievable. I couldn’t ask for a better support system here,” she said.

“I’ve raced Kona twice and it was harder than that.

“My arms were killing, but I got it done and it was a great experience. It will make every other Ironman easy.”

The champ defends! Congratulations to @Guiden96 who takes the #IM703WC : "I was kind of worried going into T2 because I'd put a big hole in on the bike. But in the end, I ran quite well and I'm super happy to remain world champion." pic.twitter.com/lAiEDHv81m

Parker said she had to stop at times on the steep hills during the 21.1km run leg.

A 4-hour flat finish thanks to a 1:18 run split for newly-minted champ, @LucyAnneCharles ! #IM703WC pic.twitter.com/tsARXpefiC