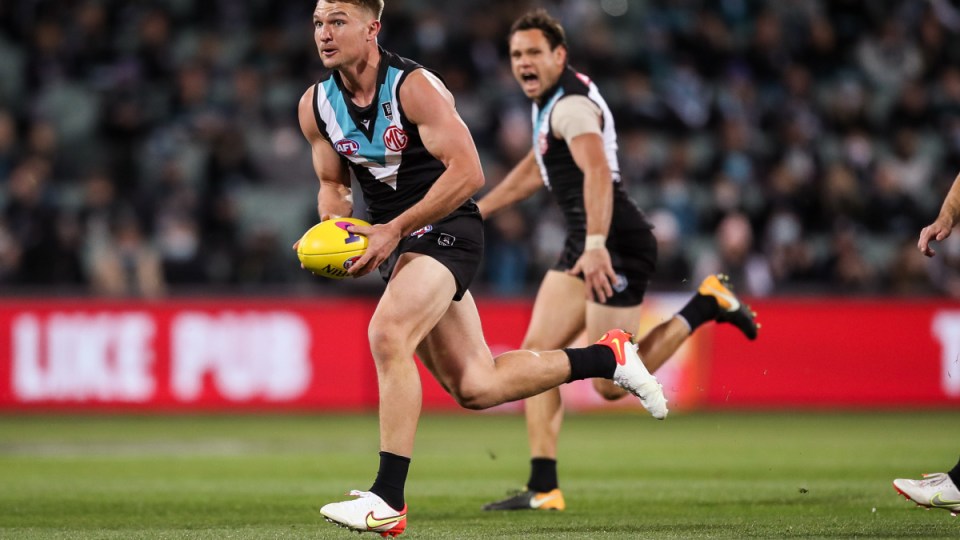 Ollie Wines has won the Brownlow Medal as the AFL's best and fairest player for the 2021 season. Photo: AAP

The Bulldogs star had led since round 12, but did not poll after round 19.

Wines hit the lead with one vote in round 22 and another two in round 23 against the Bulldogs.

Melbourne onballer Clayton Oliver was third on 31 and Carlton young gun Sam Walsh was fourth on 30 – the first time four players have polled 30 or more in seasons where the umpires awarded one set of 3-2-1 votes.

Wines, 26, polled in 16 games – a Brownlow record and his tally of 36 equals Richmond star Dustin Martin’s record total in 2017.

Their first Brownlow is some small consolation for Power after the Bulldogs humiliated it in the preliminary final, winning through to Saturday night’s grand final against the Demons.

After round 18, with five games left, the count was down to five players – Bontempell on 30, with Walsh and Wines on 27, Oliver on 26 and Darcy Parish with 24.

As the tension built, there was an amusing circuit breaker at the end of the round 19 votes.

Reckon you'll be able to get onto talkback tomorrow Ollie 😅#Brownlow pic.twitter.com/O8cIBJRFD7

The Seven Network started the audio for round 20 before AFL chief executive Gillon McLachlan had read out the votes for the crucial Bulldogs v Melbourne match.

Sure enough, Bontempelli polled three votes to retain the lead.

It was thought that Oliver might have too much competition from teammates and that was highlighted in round 20 when he polled one vote.

The flying Tiger has taken out the 2021 @FOURNTWENTY Mark of the Year for this incredible grab against the Cats 🙌#Brownlow pic.twitter.com/PEES1xkecs

For the second year, COVID-19 impacted heavily on the award.

The Demons and Bulldogs were at Optus Stadium, but watched the count in separate rooms away from the main function.

There was also a function in Brisbane and other players in Melbourne were shown on video links during the count.

In his welcome speech, AFL chief executive Gillon McLachlan urged everyone to be vaccinated “so we can united as one”.

That was greeted with warm applause in the main function room.

Twenty years after Jim Stynes won the Brownlow, tribute was paid to the Melbourne great.

Since being released from prison late last year, Cousins has found work and is playing local football again.

Also on Sunday night, Fremantle’s Caleb Serong won goal of the year and Richmond star Shai Bolton was awarded mark of the year.