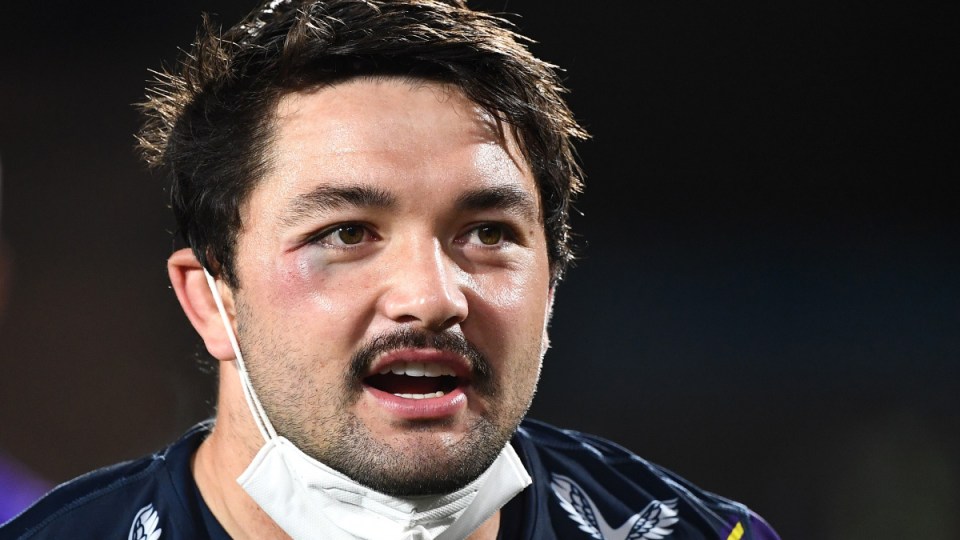 Brandon Smith admits he cried at the thought of his season being ended prematurely before scans later confirmed he had not broken his cheekbone.

Both Smith and winger Josh Addo-Carr have declared they will be fine to face Penrith in Saturday’s preliminary final, with co-captain Jesse Bromwich warning they can still go to another level.

Smith will likely retain his role as starting hooker, before reverting to sniffing around the ruck at lock when Harry Grant comes on.

But the story could easily have been so different after a heavy head clash with Manly’s Josh Aloiai left him with a severely swollen face in the qualifying final.

“When it happened it hurt but I didn’t think I had broken it,” Smith said.

“But the physios asked me what the symptoms were and I just said my face is numb. They thought that was a clear sign of a fracture.

“I had a little cry in the change rooms for a bit because they’d told me it was broken.

“It wasn’t good signs but I couldn’t go out there (on the sidelines), moping around and feeling sorry for myself, the team wouldn’t have wanted that.

“I had to just try and stay positive as I could and try to have some impact even though I’m not out there on the field.”

Smith joked that his injury would not have hurt Melbourne given he could easily be replaced by Queensland hooker Grant.

But he is a key cog in a machine that has somehow improved despite the absence of retired skipper Cameron Smith.

Storm has enjoyed a record-equalling run of 19 straight wins on its way to registering the greatest for-and-against record in NRL history, piling on 40 points or more in a game 12 times this year including a 40-12 qualifying final rout of Manly.

Saturday will mark its seventh straight preliminary final and is vying for a fifth grand final in six years.

Yet Bromwich believes the portents are good for Melbourne to raise the bar again.

“It will be nice to field a full team next game,” Bromwich said.

“I think we haven’t been able to do that for a long time.

“I know a lot of clubs are carrying injuries, but to be able to name your full-strength side in a preliminary final is great.

“I am looking forward to seeing what we can do. Hopefully, we give it a shake in the prelim.”

"I'm up to about 95 per cent running, so I'll be sweet."#PurpleReign

Addo-Carr, meanwhile, said he was back to running at 90 per cent after a hamstring injury three weeks ago, revealing he never feared his season was over.

His return bolstering a backline that has fullback Ryan Papenhuyzen firing again and Cameron Munster back to his best after overcoming a knee infection.

“The physio reckons I’m in a good place at the moment,” Addo-Carr said.