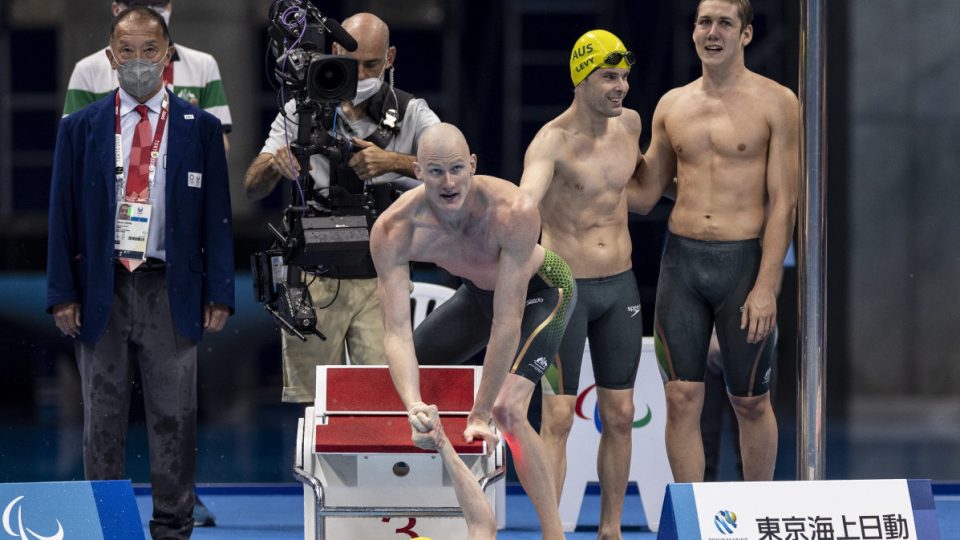 Ben Popham felt like a schoolkid who knows he’s in the unbeatable dodgeball team as he anchored Australia to a world record in Paralympic swimming.

GOLD for Australia and a WR!

Michael Burian broke the world record as well in the F44 javelin, but won silver in the combined event when Indian Sumit Sumit also smashed the world mark in the F64 category.

Monday’s haul of three gold, two silver and a bronze meant Australia improved by two places to sixth on the medal tally with 11 gold, 17 silver and 14 bronze.

Li Na Lei and Yang Qian train together and win gold medals on the same evening too ❤️#Tokyo2020 | #Paralympics pic.twitter.com/MCBI7A0DZx

The relay gold was Australia’s first in the pool since it won four on day one and also its first swimming world record at the Tokyo Games.

“It was a bit like in PE, when you go for dodgeball and the teacher randomly sorts teams,” Popham told the Seven Network.

“But you can tell you’re on the better one – you’re quietly confident you’re not going to be battered by some dodgeball.

“They (his teammates) have been super-stellar.”

The Australians stuck to their race plan of leading at every change, clocking three minutes 44.31 seconds to break Italy’s previous world mark of 3:46.06.

Italy finished 1.58 seconds behind for the silver medal and Ukraine was 3.09 seconds off the pace for bronze.

It was the second Tokyo gold for Popham, who took out the S8 100m freestyle, while Martin won the S9 400m freestyle on day one and Crothers also won the S10 50m freestyle.

But Sumit smashed his old mark of 62.88 with 68.55 to take out the combined category, while Sri Lankan F44 competitor Dulan Kodithuwakku won bronze with 65.61.

Also at the track on Monday, Rheed McCracken won silver in the T34 100m, while Rio gold medallist Scott Reardon was fifth in the T63 100m final.

But she scraped through to Tuesday night’s final as the 10th and slowest qualifier.

In wheelchair tennis, Dylan Alcott is through to the quad singles semi-finals with a 6-0 6-1 quarter-final win over American Bryan Barten.

Australia blew a strong start against Great Britain in wheelchair basketball to lose its last pool match 70-69, but was already through to the quarter-finals.

Australia's Amelia White and her horse Genius 60 score a total of 72.660 to put her in second position in the Individual Freestyle Test Grace V.#Tokyo2020 | https://t.co/eLUacr2Xu5 pic.twitter.com/n9AgwGwf19