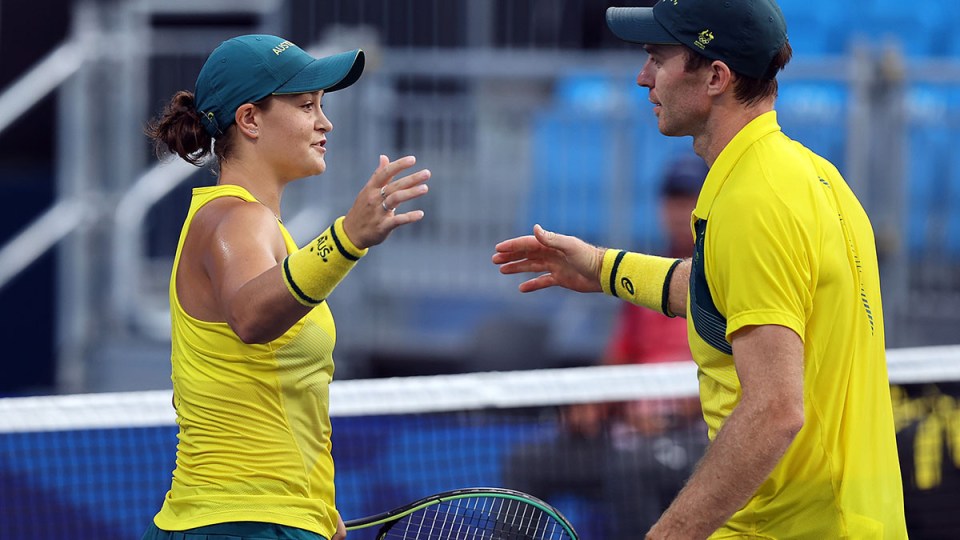 Barty and Storm Sanders were up a set and in command against Czech top seeds Barbora Krejcikova and Katerina Siniakova but missed a golden chance of a semi-final berth in a 4-6 6-4 10-7 loss.

Then five-time Games veteran Sam Stosur and Ellen Perez were beaten 6-4 6-4 by Swiss duo Belinda Bencic and Viktorija Golubic to extinguish hopes of a medal charge on Wednesday.

If either pair had won they would have at least played off for bronze, or played each other in the gold medal match if they had won their semi-finals.

Barty was quickly back in action though as she partnered Peers to a 6-1 7-6 (7-3) win over Argentina’s Nadia Podoroska and Horacio Zeballos.

They will play high-profile Greek pair Maria Sakkari and Stefanos Tsitsipas in the quarter-finals, with all matches on Thursday to begin from 3pm – four hours later than originally – in response to the oppressive heat that has taken its toll.

It was the Australian pair’s first match together since 2014, when they reached the quarter-finals of the US Open.

Well done to both on a great run 👏#TokyoTogether | #Tennis | @AUSOlympicTeamhttps://t.co/ITjZWD2WLh

Barty took a break from the sport after that but has remained close friends with the Peers family throughout, even living with them when she returned to tennis in 2016.

“Ash and I have played a few mixed together back in the day, before she retired on me,” Peers joked.

“My little sister and Ash are really close friends and stay in touch all the time. They’ve known each other for too many years to probably count.

“We’re just close family friends that get on really well on and off the court – more off the court these days, but it’s always nice to get on court together with her again.”

Their reunion could pay instant dividends though, the pair suddenly within one win of at least a bronze medal match.

It would offset an otherwise forgettable week on the court for the recent Wimbledon champion, who was a shock first-round singles loser.

“As soon as we got out there, it felt like we never stopped (playing together),” Barty said.

“I think that’s the beauty of knowing someone off the court as well as on the court.”

“This morning was disappointing to not be able to get through that doubles match, but we played a good level.

“It was nice tonight to get a win on the board. We’re still in the hunt for a medal for Australia, and we’ll do the best that we can to try and achieve that.

“For Johnny and I this is a really, really special moment to make Mama Peers proud.”