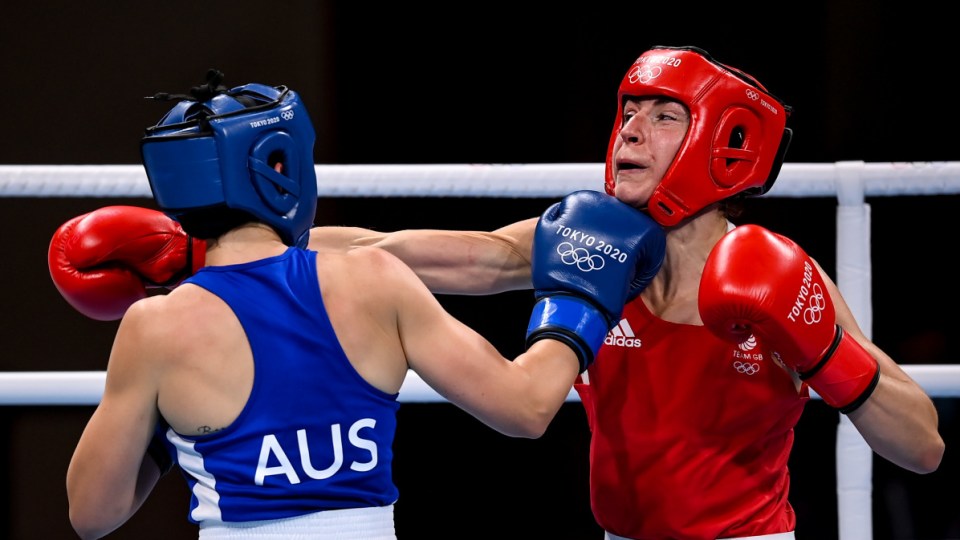 Skye Nicolson gets through the defences of Karriss Artingstall in Wednesday’s quarter-final bout. Photo: Getty

Skye Nicolson fell to the floor in despair after being denied Australia’s first Olympic boxing medal since 1988 in a gutting quarter-final loss in Tokyo.

The featherweight thought she had done enough against Great Britain’s Karriss Artingstall after boxers entered the final round all square according to the five judges.

But, as both boxers prayed while waiting for the call, the decision fell the Brit’s way and Nicolson crumpled to the ground in tears.

It was a desperate final round, with three judges giving Artingstall the nod to secure a 3-2 win.

That’s despite one judge awarding all three rounds to the 25-year-old Australian, while four of the five gave her the edge in the second round as Nicolson’s left jabs to Artingstall’s body proved impossible to defend.

A win would have guaranteed bronze, given both semi-final losers are awarded third, while the wait goes on for Australia’s first Olympic boxing champion.

It’s a heartbreaking end to Nicolson’s campaign, the Queenslander fighting for late brothers Jamie – a 1992 Olympian – and Gavin, who tragically died in a car accident while en route to boxing training in 1994, a year before she was born.

No need to apologise @SkyeNicolson.

Well fought and we're all right behind you ❤️#Tokyo2020 | #7Olympics pic.twitter.com/AYHwOhh6cw

The 25-year-old didn’t want to hear that she was still Australia’s most successful female boxer.

“It means nothing to me,” she said through tears.

“I don’t care about that. I care about what I know I’m capable of and not achieving it. It’s just really heartbreaking.

“I came here with one goal and that was the gold medal and I truly believed that I was going to win it.

“So, to go out now it’s really really hard for me.”

Earlier teammate Paulo Aokuso was beaten in similar fashion in the light heavyweight round of 16 by favoured Spaniard Gazi Jalidov Gafurova.

Aokuso dominated the second round 5-0 but lost the third 4-1, the win ultimately decided by a 3-2 first round awarded to the Spaniard despite the Australian landing several solid blows.

Caitlin Parker was beaten 5-0 by Panama’s Atheyna Bylon in the middleweight division.