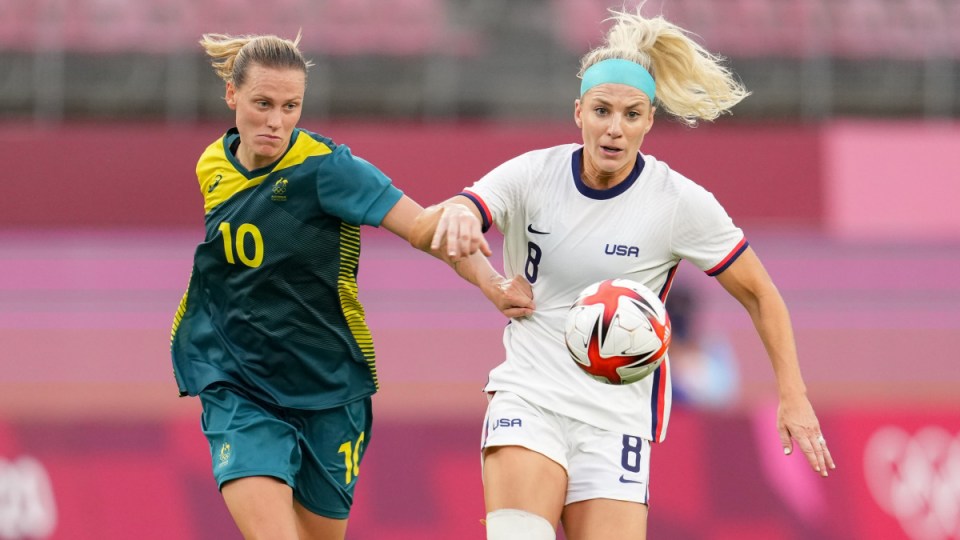 The Matildas will take on Great Britain in a tantalising prime-time Olympics showdown after sealing a berth in the Tokyo women’s soccer quarter-finals.

Australia’s scoreless draw with the United States on Tuesday night saw it finish third in Group G and other results ensured qualification to the knockout stages as one of the two best third-placed teams.

The Matildas have never played Great Britain or its associated entities – England, Scotland and Wales – at a major tournament.

Earlier, Australia went toe to toe with the US before both teams settled for a stalemate, meaning the Matildas finished third in the group on four points, due to the Americans’ superior goal difference.

“We played really well. I thought we dominated for most of the game,” captain Sam Kerr told the Seven Network.

“But at the end of the day you don’t win a medal by tying with the USA.”

Coach Tony Gustavsson will sweat on a medical update on Caitlin Foord, who was replaced by Mary Fowler shortly before kick-off.

“There’s something with her leg that (the medical team) felt it was a risk for her to play. She felt something in the warm-up and we wanted to play it safe,” he said.

Gustavsson lauded Fowler’s “mental strength” with the 18-year-old a shining light in her unexpected first Olympics start as Australia took it up to the world champions.

The US almost opened the scoring in the eighth minute when Alex Morgan burst away on the break, but Teagan Micah made a comfortable save.

Ten minutes later, the Matildas almost snatched the lead when Ellie Carpenter’s long throw caused chaos in the 18-yard box and Fowler looped a header off the crossbar.

Australia dominated most of the opening half hour then had a scare in the 31st minute when Morgan headed home at the near post, only to be ruled offside.

In the 43rd minute, Kerr found Tameka Yallop, who hit her chance from a tight angle straight at US goalkeeper Alyssa Naeher.

Two minutes later, US star Julie Ertz made a brilliant last-ditch tackle on Kerr to ensure a half-time stalemate.

After some early second-half chances, both teams sat back for the final 20 minutes in a dour end to the contest while Kerr received treatment in the 87th minute but returned to the field.

Could that be the goal that sends them through to the quarter-finals?#Tokyo2020 | #7Olympics pic.twitter.com/ty3UfzbTnU