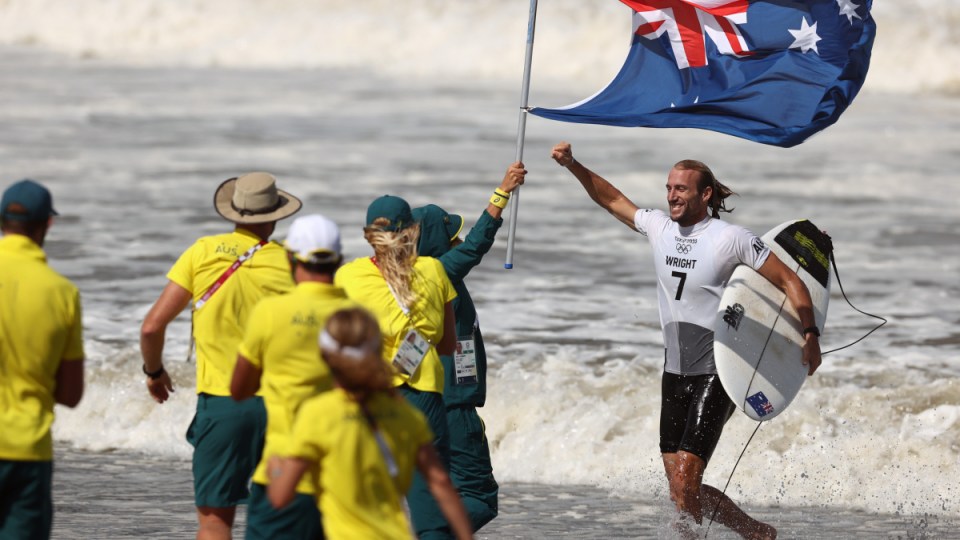 An emotional Wright celebrated on the beach with the rest of the Australian team, who christened themselves the Irukandji after the venomous jelly fish.

With Wright in the middle of their victory circle, he faked “stinging” his teammates and they dropped to the beach as he roared in triumph.

But it was a mixed day for the Australians at Tsurigasaki Beach, with Sally Fitzgibbons in tears and lamenting her surprise quarter-final loss as the toughest blow of her career.

Huge congratulations @RealOwenWright – what a nail-biting final, with a top score of 11.97, only 0.2 point ahead of Brazil's Gabriel Medina with 11.77#TokyoTogether @SurfingAus #Surfing pic.twitter.com/uQXsj1B5vY

Wright suffered a near-fatal head injury while surfing at Hawaii’s Pipeline in 2015, with the bronze medal capping a remarkable comeback.

The accident left him with severe concussion and Wright has been through a long period of rehabilitation.

“On a really personal level … all the people who have had really bad brain injuries, I just want to let you know it’s all possible, don’t give up, keep striving to get back there,” he told the Seven Network.

Wright said he went through some “tough times” and surfing’s Olympic debut spurred him to keep going in the sport.

The 31-year-old had a nail-biting duel in messy surf with Medina, the Olympic gold medal favourite.

The Australian had wave priority at the end of the clash and stuck to Medina like an irukandji to deny the Brazilian any late scoring opportunity, winning 11.97 to 11.77.

“I got my waves and then I just (wrapped) him up in the tentacles, which is what we’ve been using all week, the irukandji tentacles … I didn’t let him breathe,” Wright said.

“My heart was beating so hard.”

Wright belongs to a hugely-talented surfing family – sister Tyler is a two-time world champion and younger brother Mikey is also on the world tour.

After recovering from a traumatic head injury that almost ended his career in 2015, Owen Wright has just won surfing's first-ever Olympic medal.

Listen to the story of his emotional journey in the #OlympicChannelPodcast: https://t.co/EspuczckVv

While Wright gave the Irukandji a victorious end to their Olympic campaign, it was a hard day for Fitzgibbons.

Japan’s Amuro Tsuzuki used her home-beach advantage to perfection in the tricky conditions, eliminating Fitzgibbons 13.27 to 11.67.

“This hurts so bad, this one (is) the toughest loss of my career,” said the Australian.

“My heart is just shattered.”

Wright started the day by beating Peru’s Lucca Mesinas in a quarter-final and then narrowly lost his semi to Brazilian Italo Ferreira.

Konoa Igarashi joined Tsuzuki as Japanese giant killers, executing a stunning aerial to down Medina in their semi-final and set up the gold-medal match against Ferreira.

The Japanese star unleashed a 540-degree mid-air rotation and looked as surprised as everyone else when he landed it perfectly.

The men’s and women’s finals were moved forward by one day because of the conditions generated by tropical storm Nepartak.

Top American Carissa Moore beat giant-killing South African Bianta Buitendag for the women’s gold medal, while Tsuzuki upset American Caroline Marks for the bronze and Ferreira was too good for Igarashi in the men’s gold-medal match.