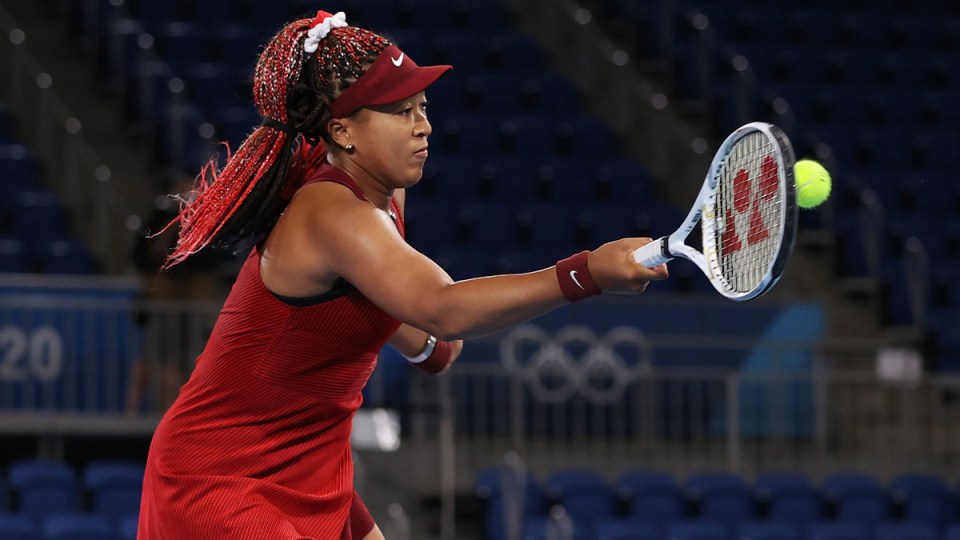 Naomi Osaka of Team Japan has crashed out of the Tokyo Olympics. Photo: Getty

Japan’s Naomi Osaka has been beaten in the third round of the Olympic tennis women’s singles, crashing out 6-1 6-4 to Marketa Vondrousova of the Czech Republic.

There will be no gold medal for the face of the Tokyo Olympics after Naomi Osaka was beaten by Marketa Vondrousova in the third round of the women’s singles.

The 23-year-old had hoped to play a starring role in the Games on the court as well as off it but lighting the Olympic flame at the opening ceremony will be the high point.

Osaka had looked good in her first two matches, particularly against Viktorija Golubic on Monday, but former French Open finalist Vondrousova was a step up in level and the young Czech produced an excellent performance under the roof at the Ariake Tennis Park to win 6-1 6-4.

Vondrousova mixed her trademark drop shots with big serves and powerful groundstrokes and defended brilliantly when Osaka got her game going in the second set.

The four-time grand slam champion did not move as well as she can, perhaps a legacy of the eight-week break she took for mental health reasons before this tournament.

Osaka had won 25 of her past 26 matches on hard courts, winning grand slam titles at the US Open and Australian Open and, particularly given the early defeat for Australia’s Wimbledon champion Ash Barty, the stage seemed set for her to claim arguably the biggest title of them all.

But instead it is 22-year-old Vondrousova who becomes the first player through to the quarter-finals, where she will take on either Paula Badosa of Spain or Argentina’s Nadia Podoroska.

Osaka, who had hoped to become the first Japanese tennis player to win Olympic gold, had no answer to Vondrousova in the first set.

She responded well at the start of the second with a break of serve but was quickly pegged back and, although she saved two match points at 5-4, another followed and Osaka sent a backhand wide.