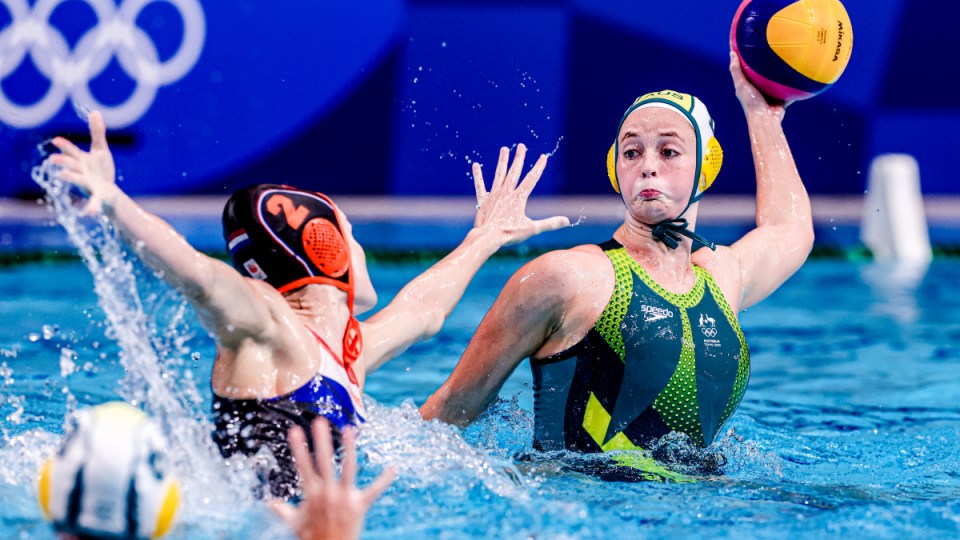 Abby Andrews shapes to shoot over Maud Megens of the Netherlands on Monday. Photo: Getty

Australia’s women’s water polo team has stormed from four goals down to beat the Netherlands and remain undefeated in Tokyo.

Trailing 8-4 just before half-time, the Stingers kept their composure to run down the powerhouse side in a 10-4 second half.

The win follows an 8-5 defeat of Canada and all but guarantees Australia a quarter-final berth ahead of their remaining pool games against South Africa and Spain.

Abby Andrews starred with three crucially-timed goals and some fierce defensive work against the physical Dutch, while veterans Bronwen Knox (two) and Rowie Webster (three) both scored late in the final quarter to seal the win.

A great comeback from the #AussieStingers!

From an 8-4 deficit just before half time, @WaterpoloAus fight back for a 15-12 victory 💪#Tokyo2020 | #7Olympics pic.twitter.com/hB8wJsXYvG

Hannah Buckling also scored three goals while Zoe Arancini (two goals) was again on target with her cheeky long-range lob, and goalkeeper Gabriella Palm made a clutch close-range save to see off the Netherland’s last push.

The Dutch had benefited from a string of Australian exclusions for penalties in the first half to build their lead.

But they couldn’t exploit them in the back end of the contest, four times being turned away by some desperate defence when Australia was a player down.

“That’s a huge learning curve for me that match, and it’s awesome (in) my second Olympic game to come away with a win, and a win like that, where we were down by so many goals,” said Matilda Kearns, who slammed home a late goal.

“Just seeing the older girls step up and play with composure … it makes me so excited to see what this team can do for the rest of the Games.”

The Stingers have finished first, fourth, third (twice), and sixth since women’s water polo was introduced, with the United States emerging as the clear superpower after Australia pipped them for gold in Sydney.

But Australia beat the US – ending a 69-game winning streak – in their most recent competitive match in January 2020 before COVID-19 took hold.

That victory came after the Stingers had opted to become “amateur professional athletes”, according to Webster, and drop their outside work commitments in the lead-up to the Games.

From jobs to a federal ICAC, here are the top priorities for the new Labor government
Badminton finals out of reach for Australian pair
Today's Stories