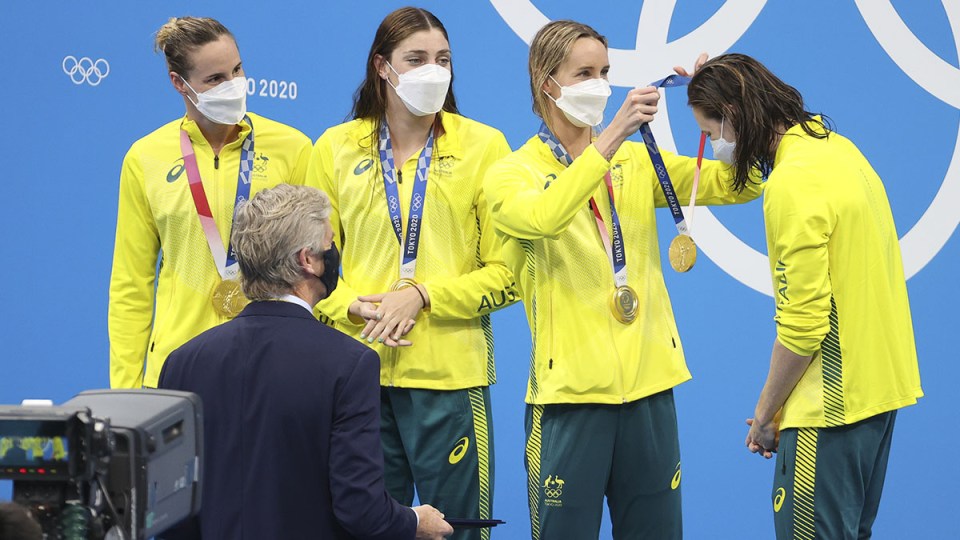 The Australian Olympic Committee insist the nation’s medal-winning swimmers did nothing wrong when briefly removing their masks on the podium at the Tokyo Games.

Early on Sunday, the International Olympic Committee cautioned that masks were a “must to have” at Tokyo medal ceremonies.

Masks are mandatory across all Olympic venues, both inside and outside for all athletes, staff and media, as part of Games organisers’ strict measures to combat coronavirus.

“It’s not a nice to have. It’s a must to have,” said IOC spokesman Mark Adams.

The AOC responded by saying the swimmers, including the gold medal-winning women’s 4x100m freestyle relay team anchored by Cate Campbell, had been following instructions.

“(The) IOC indicates there’s a new policy that allows for athletes to take masks off for 30 seconds at the podium for photographs,” the AOC said in a statement.

“Then masks go back on.

“Our athletes were simply following the direction of the official at the podium, who holds up a sign saying masks off briefly for the photographs. That’s what our girls did.

“The IOC has confirmed this and there’s nothing wrong with athletes doing this.”

The IOC later did acknowledge that an athlete winning a medal is “a unique moment in their sporting career”.

But the new maskless moments require athletes to stay on their own podium steps.

In line with the #Tokyo2020 Playbooks and scientific advice, the victory ceremony protocol has been adapted to allow, as of today:

Masks must be back on for group photos on the top step.

American Chase Kalisz took off his mask on the podium after his gold-medal performance in the men’s 400m individual medley, hugging compatriot and silver medallist Jay Literland, who was also mask-less.

“Ideally I will wear it as much as possible. If I had the mask off on the podium it was really because someone was holding a sign,” Kalisz said.

“I can’t speak for what the proper protocol was but he had a sign on the podium that said mask off – mask on, so that’s what we did.”

The Olympic teams of Kyrgyzstan and Tajikistan had paraded mostly maskless through the National Stadium at Friday’s opening ceremony, marking an awkward contrast with other national teams who covered their faces in line with COVID-19 protocols.

Organisers announced another 10 positive COVID-19 cases to Games-related individuals on Sunday, bringing the total to 132 cases since July 1.

The Tokyo Olympics are being held mostly without spectators as the capital has seen a rise in daily cases in recent weeks, reaching 1979 on Thursday, the highest since January.