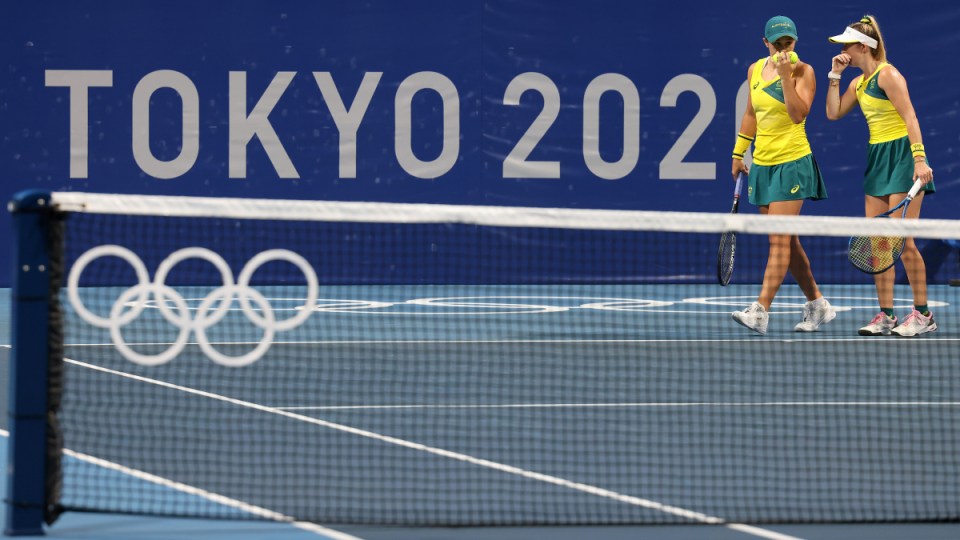 Ash Barty has bounced back from her singles loss to progress in the doubles with Storm Sanders. Photo: Getty

Naomi Osaka didn’t flinch as she edged closer to a medal at her home Olympics while Ash Barty and Sam Stosur stayed alive in a mixed day for Australia’s tennis hopes.

Barty was dumped out of the singles in a shock Sunday first-round upset but rebounded with partner Storm Sanders to progress to the quarter-finals with a 6-4 6-4 defeat of China’s Xu Yifan and Yang Zhaoxuan.

In her fifth Olympics, Sam Stosur also reached the third round with partner Ellen Perez in a tough 7-6 (7-3) 7-5 win against Romanians Monica Niculescu and Raluca Olaru.

At opposite ends of the draw, the Australian pairs would not meet until the final if they continue their winning ways.

John Millman and Alja Tomlanjovic both lost tight second-round singles matches, Millman fighting back after Spaniard Alejandro Davidovich Fokina had served for the match in the second set to eventually lose 6-4 6-7 (7-4) 6-3 in almost three hours.

Tomljanic was up a set and a break before fourth seed Elina Svitolina produced some clutch tennis in a 4-6 6-3 6-4 win.

Earlier in the day Japanese star Osaka cruised in a 6-3 6-2 win over 49th-ranked Swiss Viktorija Golubic – a Wimbledon quarter-finalist – to reach the last 16 at the Ariake Tennis Park.

Into the women's doubles quarterfinals 👏

It’s Osaka’s first event since she withdrew from the French Open in May, revealing that she has dealt with depression. She then sat out Wimbledon.

Osaka was asked in March to handle the cauldron honours but said she “didn’t feel pressure” about the assignment.

“It’s something that you see as a kid on TV. You gather around the TV with your family at the Olympics and you watch the whole ceremony.

“I know my grandparents were probably crying and my mum of course.”

Two more wins and Osaka will be in line for more honours in her Olympic debut – a medal.

“Definitely it would mean a lot for me but I know it’s a process,” Osaka said.

“The flag is next to my name no matter what tournament I play but I feel like the scale of this is much bigger.

“It’s something I’ve been waiting for for eight years (since she turned pro in 2013).”

Who is Peter Dutton? The ex-cop tipped to be the next leader of the Liberal Party
Flying Chalmers lifts Aust team to relay bronze
Today's Stories