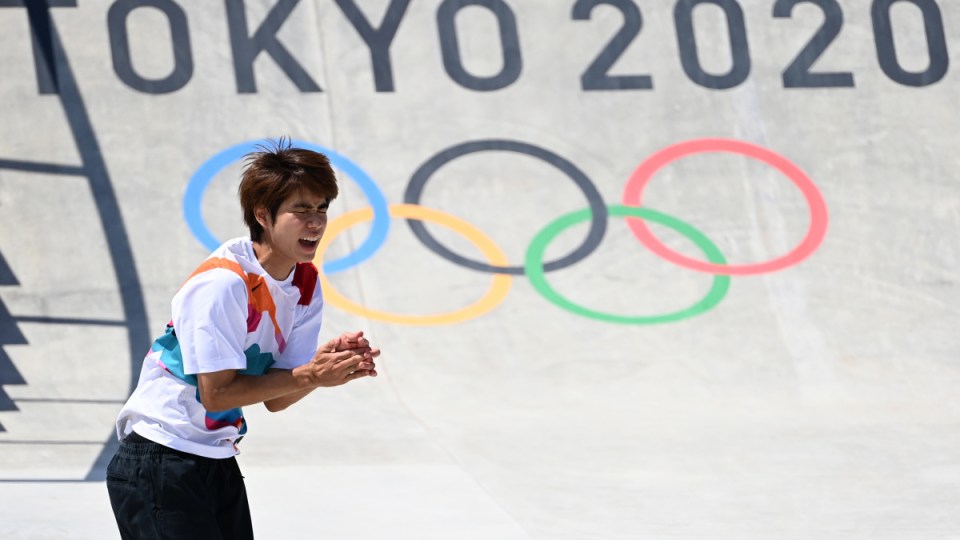 An elated Yuto Horigome turned on the flair to win the men's street skateboarding gold on Sunday. Photo: Getty

A new dawn has heralded a new hero for Japan, hometown favourite Yuto Horigome marking skateboarding’s Olympic introduction with gold in the men’s street event at the Tokyo Games.

As the sport made its Olympic debut amid a blur of baggy shirts, baseball caps and AirPods, Horigome emerged victorious at what would have been a delirious Artiake Sports Park had COVID-19 not robbed the venue of its fans.

Instead, Horigome had to make do with the cheers of his peers, the 22-year-old – who skates professionally as a member of Australian Shane O’Neill’s April skateboards team – triumphing in a nail-biting final, with Kelvin Hoefler of Brazil taking silver and Jagger Eaton of the US bronze.

“I am so happy, because this is my home town. Actually, my house is like 20 minutes from here. I was born here in Koto City, and I’m just so happy to win the gold medal here,” Horigome said.

“This is the most memorable competition for me unlike any other. I want to show the medal to everybody who has supported me and my family.”

Yuto Horigome’s dad, a taxi driver, used to skateboard, but had promised to stop bc it was seen as a sport for renegades. Instead, he took young Yuto to the park and handed him a skateboard. @JohnBranchNYT on the first ever Olympic skateboarding champion https://t.co/OLl3PfrJA0

Horigome, who earlier conceded he had not shown his best stuff in the heats when he qualified sixth for the eight-man decider, stumbled early in the final.

But he was exquisite in producing four tricks worth nine-plus points, the only rider to have more than one trick worth nine points, his final trick worth 9.30 to beat Hoefler by 1.03 points.

And now he wants to use his win and the Olympic platform to spread the word.

“I don’t think skateboarding is well recognised yet in Japan. I want to tell many people how fun it is from now.

“Skateboarding at the Olympics is different, because people who have never watched skateboarding are also watching the Games. It is broadcast on TV too, so it is a magnificent event.”

Top-ranked American Nyjah Huston looked well-placed to challenge for a medal, but he failed to land any of his final four tricks as he capitulated in the furnace-like heat to finish seventh.

“Your board like gets so hot that it kind of flexes more. That’s kind of why I fell on one of those tricks out there.”

And while Horigome claimed gold, no-one summed up the youthful nature of the sport like Eaton.

As he stood at his mark in the opening heat of the day, the 20-year-old American was on his phone as he bopped to the tunes blaring through his AirPods, before pocketing the device and rolling off for his first run.

He celebrated his bronze by whipping out his phone and broadcasting live on Instagram.

O’Neill, who would have taken solace in seeing Horigome win, failed to make it out of the heats, the Australian 31-year-old unable to land any of his final four tricks to finish well off the pace.