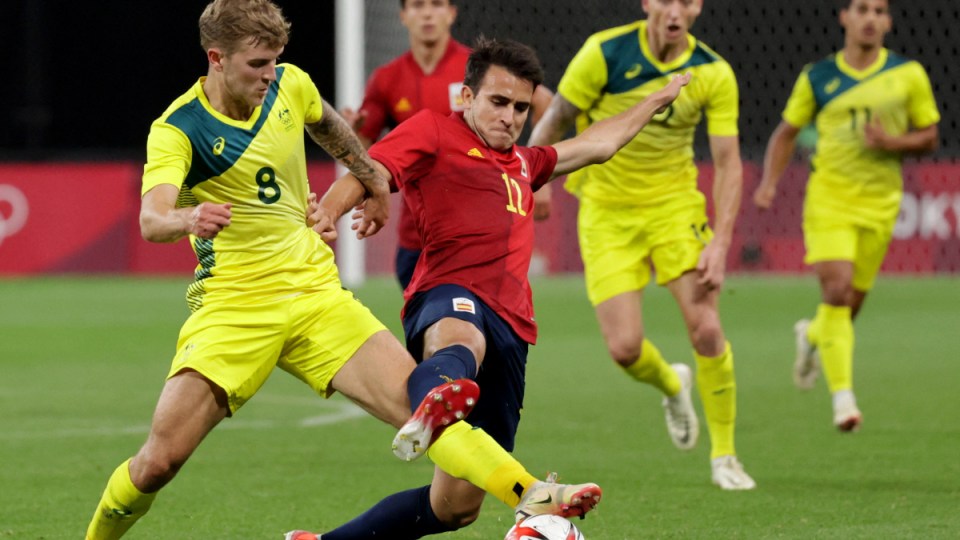 Spain captain Mikel Oyarzabal’s late winner will ensure the Olyroos’ hopes of qualifying for the quarter-finals of the Olympic football tournament come down to their final match against Egypt.

The Real Sociedad forward, one of six players from Spain’s Euro squad to start the Group C clash at Sapporo Dome, nodded home the only goal of the match in the 81st minute to secure a 1-0 win.

The strike ended a brave Australian resistance against the star-studded Spaniards and leaves the group wide open heading into Wednesday’s clash with Egypt.

Graham Arnold’s men, who stunned Argentina in their tournament opener on Thursday, sit second in the group behind Spain after two matches.

FULL TIME | A valiant effort ends in defeat by the narrowest of margins.

Argentina is third but has an inferior goal difference to Australia following its 1-0 win over Egypt earlier on Sunday.

It means Australia will reach the last eight if it can match or better Argentina’s result against Spain when it faces the last-placed Egyptians.

Arnold stuck with the same starting XI that beat the South Americans and despite only have 30 per cent possession in the opening half, Oyarzabal’s shot that rattled the crossbar in the 21st minute was as close as Spain came to a breakthrough.

Just when Australia started to dream of a securing a vital draw and putting one foot in the last eight, 24-year-old Oyarzabal popped up to break the Olyroos’ hearts.

Nothing to be taken away from the performance tonight by the #Olyroos. A side comprising of mostly @aleague players taking on #Spain which resembled their #EURO2020 side that made the last 4. With 10 min to go at 0-0 a goal by #AUS was not out of the question. Proud! #AUSvSPA

“I’m very proud of the performance and the players,” Arnold said.

“They put in a fantastic effort against obviously a very good football nation and team in Spain, but I thought we did exceptionally well.

“We’re sitting here today with qualification in our own hands. So it’s all up to us.”

Arnold will be without Mitch Duke. Riley McGree and Nathaniel Atkinson for the Egpyt match due to suspension after all three received their second yellow card of the tournament against Spain.

“OK, three players are suspended, but they will be ready for the quarter-finals.”