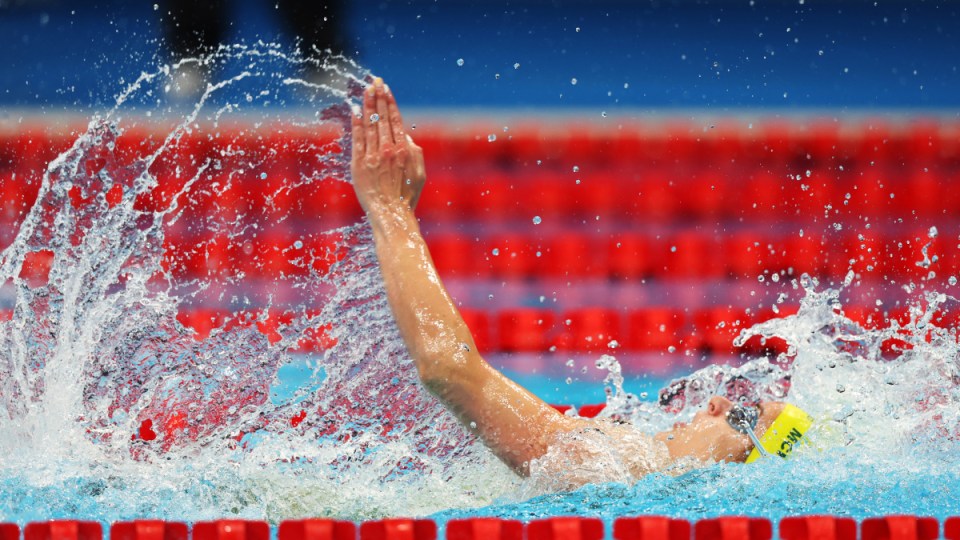 Kaylee McKeown shines in her heat of the women's 100m backstroke on Sunday. Photo: Getty

McKeown punched out an Olympic record in an extraordinary show of brinksmanship with her 100-metre backstroke foes on Sunday night.

Masse set an Olympic record in her heat and, minutes later, Smith bettered that.

Titmus controlled the field in the 400m free, with a calm and comfortable swim touching in 4:01.66.

After a huge 18 months, Tamsin Cook made her return to international swimming with a time of 4:04.80 👏#TokyoTogether | #Tokyo2020 | #Swimming | @AUSOlympicTeam pic.twitter.com/wNQu2rztt5

The 20-year-old McKeown, showing nerves of steel on Olympic debut, eclipsed them both with a fresh Games benchmark of 57.88 seconds – just 0.43 seconds from her world record.

McKeown’s 29-year-old teammate Emily Seebohm marked her fourth Olympics with a 58.86 to be fifth quickest into Monday’s semi-finals.

And 20-year-old Titmus booked a duel of the pool at the Tokyo Games: A 400m freestyle showdown with American great Katie Ledecky.

But Titmus eased to victory in her heat and was still third fastest behind Ledecky and China’s Bingjie Li.

What a night! Now get ready to back it up tomorrow 💪

In the men’s 200m freestyle, Australia’s Thomas Neill won his heat and was eighth fastest into the semi-finals but Elijah Winnington struggled again, finishing seventh.

Stalwart Mitch Larkin produced a solid heat swim to be fourth fastest into the 100m backstroke semi-finals, with teammate Isaac Cooper through in 13th spot.

Fourth place for Chelsea Hodges and she will move through to the semi final in the 100m breaststroke 🇦🇺#Tokyo2020 | #7Olympics pic.twitter.com/ujJeEaj0wB